To the devil… bad hair 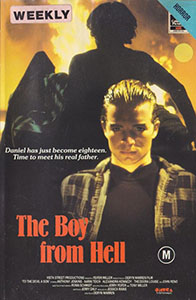 A.k.a. The Boy from Hell; To the Devil a Son

Laughter Lines: “Everybody is gonna be dead around here before you guys wanna do something about it!”

One of those demonic-child-cum-slasher things that has Jenkins as Daniel, a recently come-of-age teenager who is dropped off by his distraught mother at the St Boniface ‘Evaluation Center’ for troubled kids.

This is because his satanic dad turned up out of the blue and wants to convert sonny boy into a vessel of evil, primed to create the antichrist with a girl of his choice. He chooses suicidal Debbie, whose Chrissie Hynde-look-a-like boyfriend Charlie is suspicious of the newcomer, especially when others at the center begin dropping dead.

First to go are the nasty kids, who meet grisly accidents that include being sucked into a woodchipper; the drop-in therapist is provided with a portion of heart attack-to-go.

Having noticed that Daniel is present at every one of these incidents, Charlie attempts to convince the live-in counsellors and Debbie – in overwrought Pleasence fashion – that Daniel is evil incarnate. Daniel then makes off with Debbie for The Sexening – unless Charlie can lumber to the rescue.

Although not as predictable as the set-up might have you believe, there’s not a whole lot more than sub-par anxious shouting for dialogue and one of the most vulgar wardrobes in movie history. Attach a sappy group-hug ending and the last chance for an inventive shock all but drains away.

Passable and entertaining for lovers of bad 80s fashion and hair, but the spell it attempts to cast is a dud.

Blurb-of-interest: Theodora Louise is actually Twink Caplan, who most famously played the flustered teacher Ms Giest in Clueless. She has the worst hair here; Aarin Teich was in Darkroom.

tagged with children are evil, hair don'ts, slasher, the 80s, what the hell!?