Vincent the dog from Lost.

With the show now on the brink of its end, I was thinking about characters past and have mourned the lack of Vincent in these last two seasons when he’s quite clearly the best of the lot.

No moaning, no stupid flashbacks (although, how awesome would that be!?), no “woe is me, I am Dr Shepherd, the most lazily-drawn hero going…Wah wah wah…” 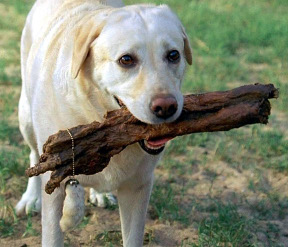 Vincent is where it’s at. He can survive plane crashes, find decomposed limbs and find hours of entertainment in a tennis ball. Even cooler that he is, in fact, a she!

With two episodes left, I’m hoping Vincent will return, unveiled as the guardian of The Island, claw that annoying Ben bloke to death and bounce through the woods in a parade of gleeful happiness.