Less a Face-off, more a comparative analysis between the original and its – ugh – remake/reimagining/reboot/whatever (…delete as applicable), some I liked, some I loathed and some I somehow preferred to the original! 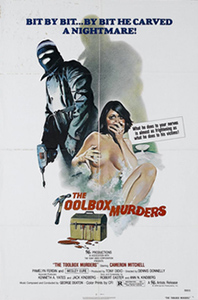 “Bit by bit… he carved a nightmare!”

This depressingly bleak pre-Halloween effort follows a ski-masked, humming maniac, who offs several women in a close-knit apartment block before kidnapping a 15-year-old he believes is the reincarnation of his dead daughter. As it predates the flood of low-budget slash flicks by a few years, the narrative seems a bit out of whack seeing it after so many template slashers.

The first thirty minutes or so is entirely comprised of the back-to-back murders of a series of pretty young women, some of whom have absolutely no lines, they’re present simply to look good, disrobe, in one case take a bath in full make-up, masturbate, and then become the resting place for the killer’s drill/hammer/screwdriver. The killer is soon after identified as the owner of the complex (Mitchell), while his kidnapping victim’s older brother tries to solve the mystery with the help of his friend – the killer’s nephew – who gets a clue and quickly becomes as unwound as his uncle, which provides a passable twist before the end title card informs us that the film was based on true events. 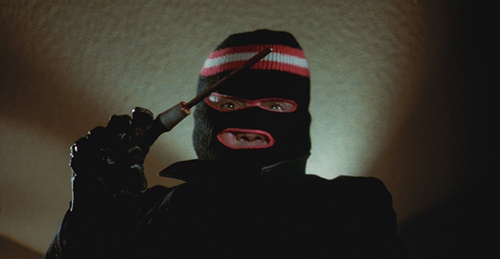 Renowned for its UK banning in 1982, like most of the Video Nasty culprits it’s notorious reputation isn’t warranted and the film is much more boring than it is gory. 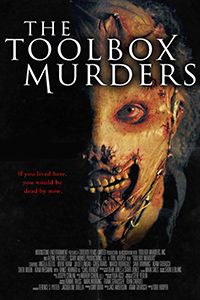 One in a million this: A remake that far outdoes the original material. In a twist of irony, the same year that his Texas Chain Saw Massacre genre staple is remade big budget stylee by Hollywood, Tobe Hooper chooses to drag drab 70s sleazefest The Toolbox Murders into the millennium, albeit on a much less grand scale than the ‘re-imagining’ of his most famous film.

This remake is pretty much trading on its notorious title and wisely steers itself in a different direction from the trashy original. Keeping the setting of an apartment block – this time undergoing a lengthy renovation project – thus providing cheap lodgings for numerous Hollywood hopefuls and youthful victims for a ski-masked killer who leaps out of doorways and from behind objects to bludgeon and drill starlets to death.

New resident Angela Bettis becomes suspicious of the extraneous sounds and missing cohabitants so decides to investigate for herself, uncovering some hidden truths surrounding the history of the structure. She also puts herself in the path of the lunatic killer, eventually facing off with him while would-be rescuers fall by the wayside with various tools sticking out of them. 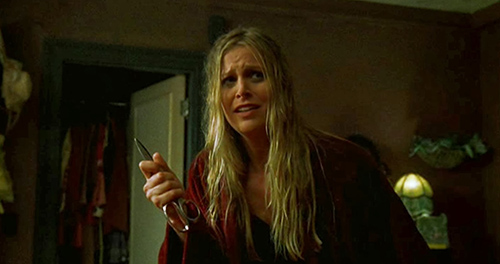 Toolbox Murders reasserts Hooper’s talent for cranking up the scares, gratefully negating memories of his feeble efforts in the years since Poltergeist (straight to video fodder Crocodile was also written by Anderson and Gierasch). He delivers several ejector-seat jump moments courtesy of avoiding the usual slasher pitfalls, and opting for catching the viewer in their off-guard moments between tension building. The final product also benefits from a good cast playing a variety of oddball characters from the stock creepy maintenance guy to the failing actors inhabiting several apartments via Juliet Landau’s sweet fitness freak, and Rance Howard as an ageing ex-actor who’s lived in the place since 1947 and might just know a little bit more about what’s going on than he’s letting on.

But its Bettis who turns in the most interesting performance as the not-entirely sympathetic heroine, giving her a dimension not always visible in central characters. All in all an overtly impressive improvement on a deservedly forgotten B-movie. Followed by a sequel in 2013.

Blurbs-of-interest: Cameron Mitchell was also in The Demon, Silent Scream, Valley of Death, Trapped Alive and Jack-O; Angela Bettis was also in May and Scar; Juliet Landau was in Hack!; Sara Downing was in Wishcraft; Christopher Doyle was one of the cops in Scream 2; Tobe Hooper directed the first two TCM movies and The Funhouse.

tagged with after they were famous, gore o'clock, Nu-di-ty, obvious identity of killer, remake, slasher