The Dolls of Death 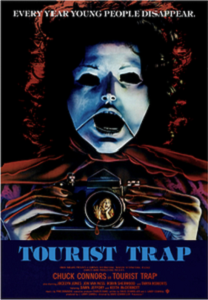 Technically one of the very first post-Halloween teen horror pics to emerge, Tourist Trap was actually shot shortly before John Carpenter started rolling on his genre-confirming film, but was released in March of 1979, by which point Halloween had happened.

Co-produced by Irwin Yablans, TT draws a significant amount of inspiration from The Texas Chain Saw Massacre instead, with five youngsters (including a future Charlie’s Angel) diverted from a backroad to Slausen’s Lost Oasis due to car trouble. They’re welcomed by the happy-go-lucky owner, who shows them his brother’s mechanical mannequins and allows them to hang around while one of their number drives off to town in a borrowed truck to find assistance.

The three girls let curiosity get the better of them and individually wander off to explore the big house out back. They soon discover that it’s inhabited by a masked loon who also has psychic powers, which he uses to kill them, until nice-girl Molly is left to save the day.

The absence of Friday the 13th-styled influences is interesting in Tourist Trap, especially as certain sequences would feel right at home on the shores of Camp Crystal Lake, with characters rambling around in the dark telling their friends to quit trying to scare them. An obvious lack of significant budget sometimes gets in the way and the film has a fair whack of padding to reach the 90-minute finish line, but ultimately its surreal embellishments outweigh the negatives, utilising the creepiness of the dummies in the shadows to the maximum effect.

Given the cult-like status of this, I’m surprised it wasn’t immediately snatched up during the remake craze of the 2000s (possible because House of Wax got there first) but never say never!