Didn’t we have a lovely day the day we went to Snape Island? 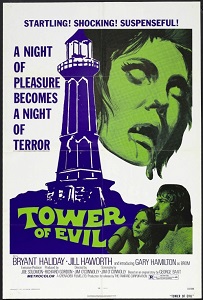 A.k.a. Horror on Snape Island; Beyond the Fog

This way ahead of its time British chiller bears more than just a passing similarity to the later and greater Hell Night.

When a hysterical naked young woman stabs a sailor dead on fog-surrounded Snape Island, she is brought back to the mainland with an old relic that is of interest to the academics, who stage a trip there to learn more, while the girl is quizzed about the gory murders of her three American friends. Seven folks take a short vacation there only to have it crashed by a shadowy killer who, it turns out, is the son of the stabbed sailor, driven crazy by the loss of his wife.

Very slow moving, which can test your patience, but things kick into gear in the second half and there’s even a formidable final girl sequence.

tagged with a time before Halloween, Nu-di-ty, Rule Brittania!, slasher