Let’s play Top Trumps with the lives of a bunch of fictional slasher flick characters yet again.

My confidence in said trades is starting to wane a little now; I’m less passionate about switching this group as the films become less…”important” to the slasher landscape, shall we say. Or maybe I’m just soppy in my old age and want them all to live?

As ever, ma-hoo-sive spoilers lie within…

Rennie Wickham (Jensen Daggett) ranks as the most uninteresting Friday final girl. It’s fair to say that imagination was in short supply by 1989 and the staggering eighth instalment so perhaps the solution was to take a step away from the weepy, good girls of the last few parts and let Saffron Henderson’s punk-tastic JJ have a go at besting Jason.

In one of the many errors this movie makes (not least in its title), JJ is killed off but 20 odd minutes into the film after just one dismal little scene in which she illustrates misfit-solidarity with geeky film kid Wayne, goes off to play her oh-so 80s guitar in the engine room and is ironically killed with it. Sucky.

Again, I have nothing against Mandy’s survival in this film – she’s one of the tiny handful of non-white girls to make it out alive – but Lenora Crichlow is given little to other than happen to not get in the way of the killer’s vengeance.

Counsellor Louise (Alex Reid), however, is smart, resourceful and puts the kids first, taking a lethal dive over a cliff top to ensure the others get away and later getting her head cut off for the trouble! 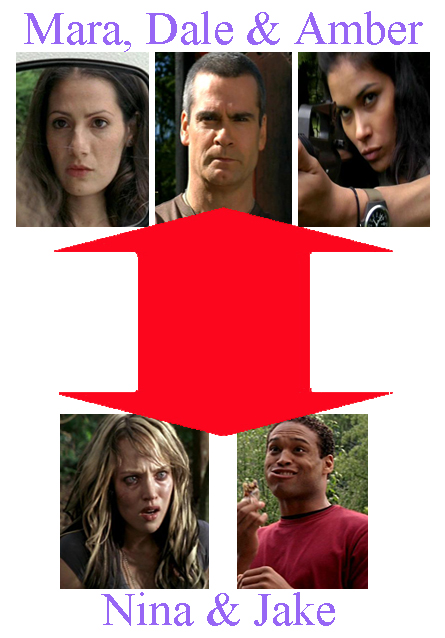 Can I opt for a special offer and trade three-for-two? Hey, it’s my game! I’ll do what I want, damnit!

So, Wrong Turn 2 is a good sequel, albeit very different to the near-perfect original, and Joe Lynch bravely juggled with the expected conventions. At the start, it looked like reluctant nice girl Mara (Aleksa Paladino), who steps into the survivalist gameshow after one constestant fails to show (read: gets chopped in two), would conquer her fears of inadequacy and survive, even after discovering her fiance is cheating on her… But no, she gets an axe in the skull fairly early on.

Final girl duties are passed on to Nina (genre regular Erica Leehrsen), who plays the character a bit more realistically, with a bitchy edge, though she does good in the end, going back to save Jake (Texas Battle) from the cannibal clan. Jake is functional as the nice guy and, for once, doesn’t conform to ghetto stereotypes as the only black guy, but I’d have preferred a different outcome altogether.

The non-white girl we’ve needed to survive all along should’ve been Amber (Daniella Alonso), ex-military lesbian and ever-prepared, who goes out with joker boy Jonesy in a double impaling arrow-through-the-eye gag.

Then there’s presenter Colonel Dale Murphy (Henry Rollins), he kicks ass left, right and center, turning up when needed to save Nina and Jake and is nice to the right people but is done away with at the last hurdle. It seems right given the survival nature of the film but I’d have like to have seen Dale save both Mara and Amber in an unusual capable-people-win for once (well, not Mara, but she didn’t deserve that axeing).