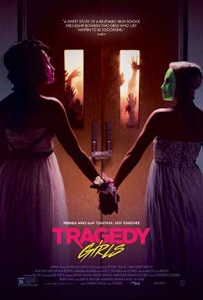 Laughter Lines: “This is some serious Final Destination shit!”

A teen couple make out in a muscle car on a lonely bridge. The girl hears a noise outside. They ignore it. The noise sounds again. She convinces the boy to go check and a hulking figure buries a machete in his face and chases down the girl. He runs into a wire and a second girl appears, they taser him and drag him back to their garage where they explain they’ve been baiting him for months and need him to work with them so they can gain followers of their true crime blog @tragedygirls. 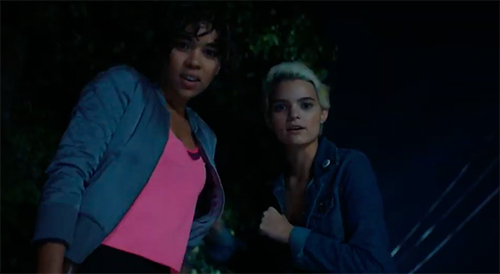 Sadie and McKayla are the titular BFFs, who will do anything to draw attention to their social media presence, hoping that their insights into the later-named Rosedale Ripper will catapult them into the spotlight. But real life isn’t that easy and it’s assumed the first victim is a runaway (for reasons unknown they destroyed the body in lye), and their next is written off as a motorcycle accident. Irked by the slow take-up, the girls ensure that victim 3 cannot be mistaken for anything other than a murder.

While the girls continue to hold their pet killer, Lowell, captive, Sadie becomes close to Sheriff’s son Jordan, who begins to suspect McKayla knows more about what’s going on than she’s letting on – and things go from bad to worse when Lowell escapes and has them firmly in his crosshairs.

More complications ensue as the girls try to clean up their mess, stay alive, and eventually fall out when Sadie is hailed as a singular hero when she fights off Lowell’s next attack, prompting McKayla to take the game into her own hands.

Tragedy Girls is a fine looking product, stirring in elements of Mean Girls to its slasher groundwork, and satire of the shallowness of external validation culture. As a comedy, it’s acid tongued good times, with a disturbing painted-on smile to its couple of psycho leads. The horror end of things doesn’t quite take flight so well, despite some grisly denouements throughout (the woodwork class and gym scenes – the latter featuring the awesome Craig Robinson – are great), but little else. Durand is a hoot as the captive wannabe psycho, as his threats to the girls are met with emasculating giggles, and both leads sell their friends-till-the-end bond well.

Creepily, Brianna Hildebrand looks like the long lost twin of my friend Alisha, so I’ll be treading carefully around her for a bit.

Blurbs-of-interest: Josh Hutcherson was in Detention; Elise Neal was Sid’s roomie in Scream 2; Jack Quaid was in Scream (2022).