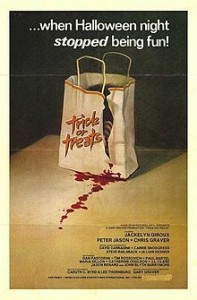 “…when Halloween night stopped being fun!”

Laughter Lines: “These horror movies… they make me scared to drive home alone at night!”

“When Halloween night stopped being fun,” goes the tagline. Darn tootin’. Short of falling ass-first on a running power drill, I can’t think of a less fun way to spend Halloween night, or any other given night, than watching Trick or Treats.

Carrie Snodgress gets her husband carted off to an institution in the opening scene. Why? No clue, ToT doesn’t care about in-filling its plot holes. The scene is slapstick heavy, with two orderlies struggling with the flailing hubby, who tries to climb a tree at one point to escape. They all end up falling in the pool. The only thing missing was a table of cream pies.

‘Several years later’, struggling actress-cum-babysitter Linda (Giroux) accepts a Halloween night job to look after the couple’s horrible, horrible son, while Mom and her new squeeze (Carradine), head off to a party. Meanwhile, Hubby has broken out of the institute disguised as a female nurse, and is heading home to murder his wife and nobody else.

Yeah that’s right, this is the slasher movie without any slashing. Hubby punches out a security guard rather than stabs him, threatens a couple of homeless guys (one of whom is horror-fixture Bartel), and eventually mistakenly kills a random blonde chick whom he mistakes for his wife. 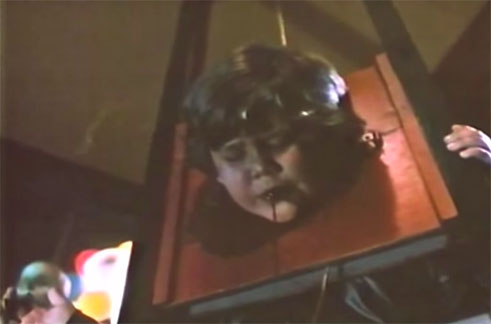 This might sound okay, but nothing remotely resembling a threat of violence happens for well over an hour into the 92 minute film. Until then, it’s a never ending cycle of the bratty kid playing a prank on Linda, that she always falls for, and some trick or treaters coming to the door. Again. And again. And again. Until death. Your death. From boredom.

With just 15 minutes remaining, Hubby finally catches up with Linda, thinking her to be Carrie Snodgress, and chases her a bit. Although the film is so darkly turned out you may as well close your eyes and rest for all the good they’ll do you open.

Blurbs-of-interest: Carradine was in Children of the Corn V, Detention (2010), and Fall Down Dead; Steve Railsback was in Deadly Games and Slash; Paul Bartel was in Killer Party. Graver later directed the equally awful Moon in Scorpio.

tagged with before they were famous, calendar carnage, children are evil, Halloween, I want to die, weird-ass twist, what the hell!?, who finances this crap!?