The third sibling of Hell Fest and Haunt? Spoilers ensue!

At a Halloween house party in 2015, a game of spin the knife ends up with pumpkin-masked Patrick ‘Trick’ Weaver, taking the blade to others in attendance, before he’s stabbed with a fire poker. In hospital, he manages to escape his handcuffs, attack homicide detective Mike Denver (Epps), and off a few more schmucks before being shot out of a window by Denver and the local sheriff (Adair). But when they get down to ground level, the body is gone, nobody really knows who he is, he has no address, no social media profiles, and no parents…

At a Halloween dance in a nearby town in 2016, Trick reappears and knives a few more patrons; in 2017 he lays yet more teens to waste at a party; and in 2018 comes after some detectives on his trail (those in denial it was the same killer, of course), leading to Denver being forced to retire early. In 2019, he returns to the original town where it looks like Trick might be back – or could it be one of his many twisted online fans?

While deputies walk into traps, surviving friends of the original killings, Cheryl and Nikki, take Nikki’s niece and nephew (or friend’s kids. Can’t remember) to the horror maze owned by local curmudgeon Mr Talbott (Tom Atkins) and naturally Trick kills and replaces a maze actor so he can run amok, seemingly in an effort to finish off those who escaped before. Curiously, one of whom, Troy, who is still in high school in his head and falsely took credit for stabbing Trick with the poker, just vanishes from the film entirely.

Things culminate with another game of spin the knife before the big twist is revealed. The trick, if you will. Anyone who’s read Kevin Williamson’s original idea for Scream 3 or seen The Following should see where it’s going, although it made effective use of the in-plain-sight angle and, because I was waiting for the more obvious revelation that ultimately came later, I wasn’t expecting it.

The trick elevates Trick somewhat, but it’s sloppily realised and leans heavily on chance, which makes it feel contrived and a bit obnoxious, in the same way that Scully was always just outside the door when aliens would appear in The X-Files; the first couple of times you go with it, but later it just pisses you off, the same as the script necessitates characters to make stupid decisions – even when told not to, deputies pursue the killer into an inescapable space. The concept just feels a decade or more out of date, and attempts to divert the audience from the neutered presence of Jamie Kennedy only serve to shine the light more in his direction. As soon as his character was acknowledged, I knew he’d be involved in one way or another. 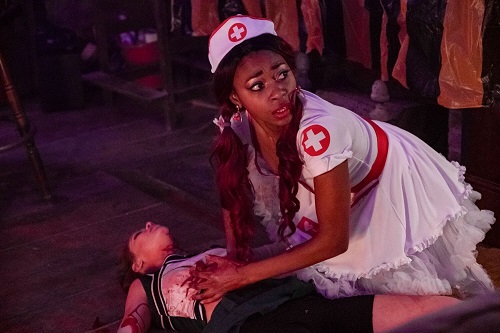 Even with a body count that spirals into the thirties, there are no chase scenes. Most victims are pounced on and stabbed while that wet-lettuce-dropped-on-the-floor squelch sound dominates the audio. The opportunity to go for laughs is avoided to the point where its po-faced seriousness almost becomes the joke, stubbornly trying to avoid the high camp that its pedalling with the outrageous things occurring on the screen. Trick is certainly no treat, but there’s enough sugar so that you won’t completely spit it out in disgust.

Blurbs-of-interest: Lussier and Farmer previously collabed on My Bloody Valentine 3D and the unproduced Halloween III script; Farmer also wrote Jason X; Omar Epps was in Scream 2, with Jamie Kennedy, who was also in the original; Tom Atkins was in MBV 3D and Maniac Cop.

tagged with get your own ideas!, Halloween, obvious identity of killer, slasher, spoilers