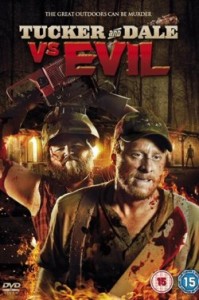 TUCKER AND DALE VS EVIL

Dire-logue: “You shouldn’t be smoking anyway, Chloe, it’s not good for you.” / “Yeah, well fucking DYING isn’t good for you either but that doesn’t seem to be stopping anybody.”

Stereotypes. They’re based on real things of course: some black people DO have rhythm; some gay men DO have great fashion sense; and some backwoods hicks are twisted murderers who like to do away with self-centered college kids. Well, all of these exist according to the movies.

In horror, stereotyping is nonnegotiable turf. Time for a change!

Tucker and Dale (not to be confused with Ch-Ch-Ch-Chip and Dale: Rescue Rangers) are just a couple of laid back country guys who like beer, fishin’ and fixing up the dilapidated summerhouse they just bought out in the woods.

However, an SUV-load of nine self-centered college kids cruise into town and take Tucker and Dale to be drooling backwoods pervs who mean them harm when, in reality, Dale is a cuddly bear who just wants to know how to talk to girls and Tucker is his loyal best bud. 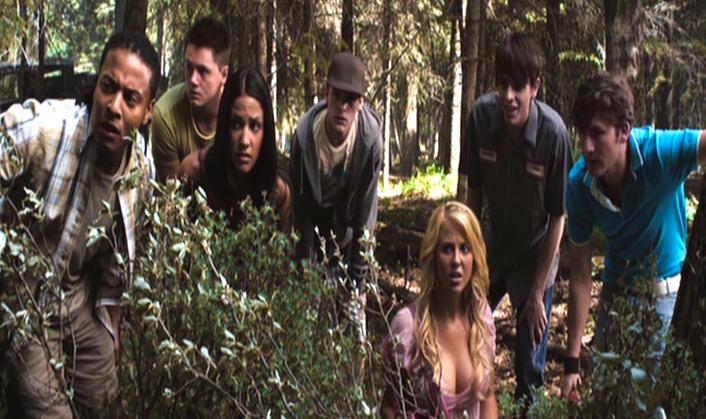 When the requisite nice girl of the college group, Allison, knocks herself out whilst skinny dipping in the lake, Tucker and Dale rescue her and the other college kids assume they’ve kidnapped her to torture and eat. While they let her recuperate on their couch, the kids, under the influence of the sociopathic Chad, decide to try and rescue her, so beginning a farcical turn of events that would put any Final Destination film to shame.

While Allison warms to Dale’s charms, her school friends begin killing themselves in ludicrously amusing ways: one, believing he’s being chased by a chainsaw-wielding killer, impales himself on a sharp branch, while another mistimes a lunge and dives headfirst into a woodchipper.

The self-inflicted demises continue as characters succeed in shooting themselves in the face, not moving out of the path of an incoming rotor blade or falling on to sharp things. Tucker and Dale, meanwhile, think the kids are hell bent on offing themselves in some sort of suicide pact and want to get rid of Allison into the bargain.

OK, so the joke soon becomes predictable but the tables are soon turned when the remaining teens kidnap Tucker and up the ante, with Chad eventually fleeing with Allison and tying her to one of those saw-conveyor-thingies you see in saw mills in a black-and-white traintrack type set up. You know what I mean!!! OK, here’s a still: 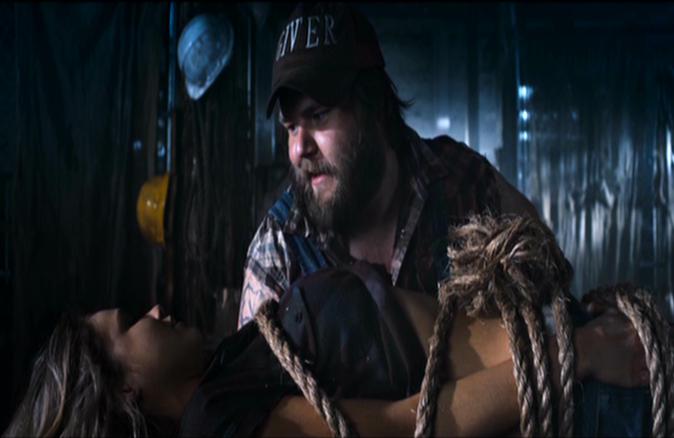 The end product is a slasher film without a lunatic killer; well, sort of. There IS a killer by the end plus some flashbacks to your off-the-shelf massacre-that-happened-twenty-years-ago, which will mean something later in the film.

Tucker and Dale is a fun movie, one to watch with friends or a big audience to really get the sick laughs but it’s never repulsive in its efforts to be funny, it’s far more sweet natured than you’d think. The only characters who matter are our titular heroes and Allison; apart from the aggressive Chad, the other teens (including a few familiar faces from the genre) have about as much depth as a petri dish and with six guys and only three girls, they blur into one another.

The cartoonishly gruesome demises are funny and there are some great lines, none of which delve particularly deep into the kind of post-modern self-referentiality of, say, Scream 4, which had a lot to say about the state of modern horror. 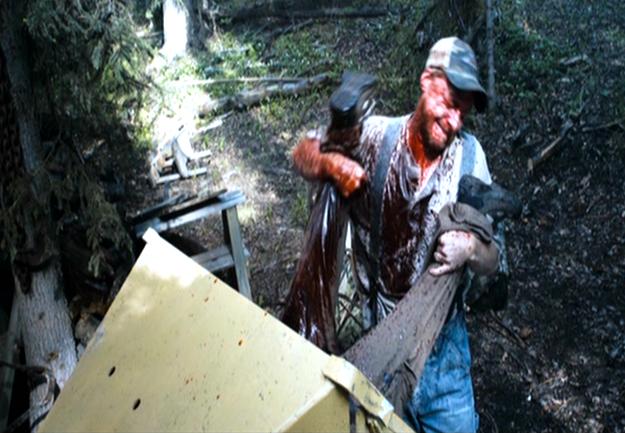 Just as Shaun of the Dead is best viewed right after Dawn of the Dead, Tucker and Dale would be great in a double feature with Wrong Turn or one of the Texas Chainsaw Massacre remakes.

Blurbs-of-interest: Brandon McLaren was in Harper’s Island, Scar 3D and Slasher; Jesse Moss and Chelan Simmons were both in Final Destination 3. Katrina Bowden was in the Adam Sandler-affiliated mess The Shortcut.