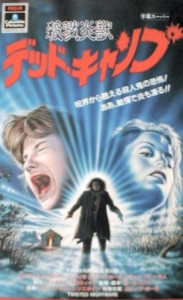 “Before the world existed, there was a power…an evil power.”

Must apologise for the cover being Japanese, it’s not easy to find much about this immensely strange film, but my UK VHS copy had the same artwork many moons ago when I still had a copy. What wouldn’t I do to get it back… Actually, nothing, it sucked.

Originally shot in 1982 at the same ranch where Friday the 13th Part III was filmed (if you believe IMDb trivia sections, but as I recall it looked similar), Twisted Nightmare was withheld until 1987. Why? Well, read on and see if you can guess…

The plot is as follows: a group of “teens” at a lakeside camp – Camp Paradise (wait till you see it) –  tease Matthew, who’s retarded (movie retarded, this is, which means he can barely walk without flopping everywhere). He tells them they’re “all bad” and runs away to the barn, only to reappear as a ball of fire and dies…but the body is never found. Hmmm. Two years later, the teens are invited back to camp where, ding ding!, a disfigured character begins murdering them one after the other.

The camp caretaker tells some of the “teens” that the camp is built atop an ancient Indian burial ground. I shit you not. This gives it power, power gives Matthew death-dodging power, Matthew-kill-everyone.

However pathetic things sound, Twisted Nightmare is a bad movie addict’s wet dream: one guy says he’s leaving in a shot where he’s wearing that trademark 80’s sweater-over-the-shoulders, only for it to completely gone in the very next shot! With way too many characters to keep track of, an aged Sheriff who’s head is literally pushed off his shoulders, a final girl who only achieves said status by being stuck in a toolshed for half the film before driving away having contributed nothing to her own survival, this is a film best left to masochists and de-taste-ified collectors.

tagged with Friday the 13th, hair don'ts, Nu-di-ty, slasher, slasher films that aren't supposed to be funny but are funny, the 80s, what the hell!?, who finances this crap!?