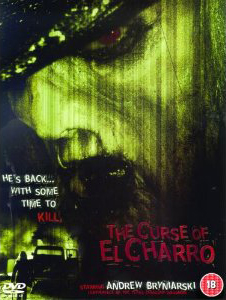 THE CURSE OF EL CHARRO

Dire-logue: “You said it, sweet cunt, now get the hell out of here before I get bitchy.”

A so-so, well-pieced together horror flick, which sees a young woman (Mia) – traumatised by nightmares after the suicide of her sister – off on a college road trip to Arizona with three other girls, two of whom are particularly nasty.

There’s an interesting angle adopted in this one and it’s also adorned with an arty credits sequence and better performances than expected, especially considering the one-note characterisation the central cast members are stuck with: There’s the drug-dealing lesbian goth chick and the trash talking ‘token’ black girl (who ends most utterances with ‘bitch’ or ‘girrrrl’), while their friends are much more pleasant. The former, of course, engages in a completely superfluous and sleazy girl-on-girl encounter, which are sadly becoming more and more prevalent in the genre.

Some messy kills – including a neat hand-chop followed by a beheading – and gallons of claret to lap up, but the ineffective climax looks rushed, lacks clarity and is just a bit dumb.

Blurbs-of-interest: Bryniarski – playing the maniac – was Leatherface in both of the Texas Chainsaw re-tools; Trejo – who voiced him – was in Rob Zombie’s Halloween.