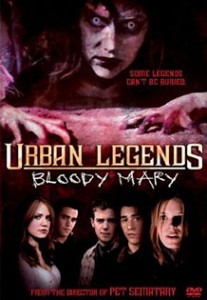 “Mary’s evil is beyond legend.”

With tenuous links to the previous films in the series and very few urban legends left to kill off teenagers with, Bloody Mary is, to date, the last film of its name, although the planned fourth instalment (Ghosts of Goldfield) was un-linked to the Urban Legend banner (ho ho ho) as Sony wanted to explore furthering the franchise on their own terms. That was almost a decade ago.

In Salt Lake City, many miles from the campuses of Pendleton and Alpine Universities, high school journalist Samantha (Mara) and friends skip their Homecoming night festivities in favour of a slumber party where they share the local myth of Mary Banner, a teenage girl who disappeared in 1969 after an altercation with some high school jocks. Having run an expose on the football team at her school, Samantha isn’t presently in anyone’s good books. That night, she and her friends disappear from the house. 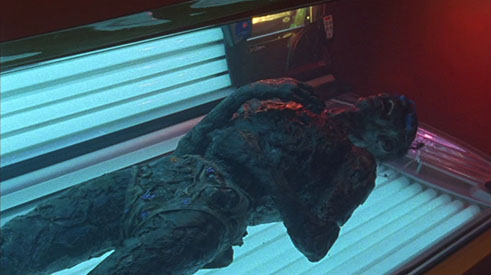 A few days later, Sam reappears, claiming she and her pals awoke in a basement far away and had to walk back to town. Although she has no proof, she and twin brother David accurately suspect a trio of jocks.

Soon after, said jocks – and a cheerleader – begin dying in strange circumstances: A vain guy is cooked alive on a tanning bed (before Final Destination 3 did it), the girl squeezes a spot which turns out to contain spider eggs that hatch countless arachnids from her face, resulting in her smashing into a mirror and filleting herself, and another takes a piss on an electric fence with sizzling results. 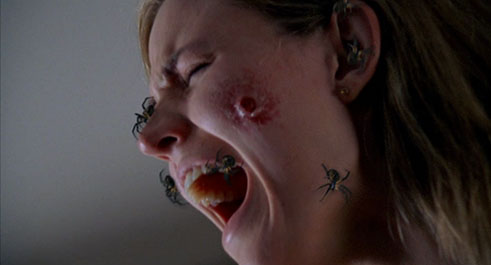 Meanwhile, Sam is being haunted by visions of Bloody Mary. She and David track down one of Mary’s friends, time-warped hippie Grace (Lifford), who thinks that finding and burying Mary’s remains will put an end to the carnage, though not before she’s done offing the responsible parties, who convolutedly all turn out to be the offspring of those involved in the ’69 incident. Grace tells them “the sins of the father are visited upon the son.”

Bloody Mary does nothing new within its confines, virtually everything that happens can be seen driving down a long straight lane towards us long before it arrives, headlights of full beam, honking the horn as it comes. There is one rather shocking turn that never seems to be processed correctly by the remaining characters, and the non-central roles aren’t really ironed out in any memorable way to make us care for the victims: They exist to be dry-roasted, electrocuted, and slashed to ribbons. 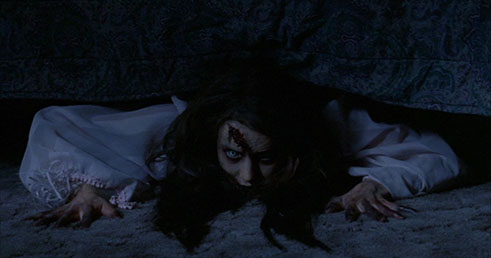 In spite of these shortcomings and a definitive drop in budgetary quality, UL3 is still plenty fun, with enough going on to keep you entertained for 90 minutes, a few more niche legends and a less obvious revelation as to the identity of ‘the final assailant’ would’ve helped but as it is, fun times for any slumber party.

tagged with before they were famous, sequel city, slasher