Camp Crystal Lake was known as Camp Blood by the locals, ‘cos of all the, y’know, DEATH. A film called Camp Blood peaked my interest over a decade ago when browsing the bottom shelf of the horror section. It’s time to avoid that section no more once again as I save you from suffering through another stack o’ shite slash… 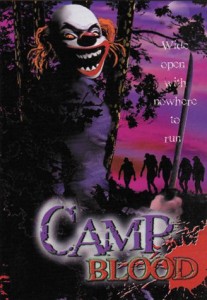 “Wide open with nowhere to run.”

If I’d made this film, I’d forgive you for calling it a pile of shit. I would, honestly. Whether Brad Sykes would forgive you – or indeed me – is another matter…

The title alone informs us that this is going to rip off Friday the 13th to some extent, but there’s also some Blair Witch in there too. Within two minutes we’re privy to some gratuitous nudity and the obligatory slashing that occurs everytime somebody disrobes in the woods. Try it and see!

Four city folk drive out into the woods to spend the weekend at Camp Blackwood but are, of course, stalked and slain by a clown-masked, machete-toting loon. Every predictable element is tossed into this shit salad: the insane old man who declares them to be doomed, a crappy legend that’s about as frightening as goldfish (but still manages to necessitate dialogue such as “I just can’t stop thinking about that story…”), characters who jog as slowly as possible away from the looming killer, cell phones fail, walking near a twig means you’ve sprained your ankle and therefore you can’t walk… It’s unrelenting.

By far the worst thing occurs when the final girl escapes and is accused of being behind it all and the other actors who played her now-dead friends don new roles as cops and nurses etc with barely any attempt to alter their appearances. Jason wept… 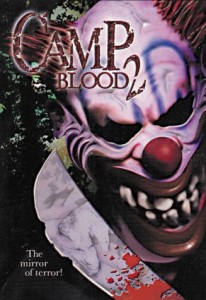 Before torture-porn there was torture-quality. As if one of these films wasn’t bad enough, the same ‘production’ team return for another helping of the same with absolutely no lessons learnt from their previous outing.

One year after surviving the Camp Blackwood slayings, a director with as little talent as Brad Sykes invites sole survivor / prime suspect Tricia – who has been locked away in an asylum that has an inch-thick wooden door to keep her confined – to be the ‘technical advisor’ on his screen immortalisation of the events according to her statement.

Without any explanation whatsoever, the doctors just let her leave without a chaperone, an electronic tag or a T-shirt that says “Hi there! If I go mental and try to kill you, return me to Loonsville Asylum!”

More attempted in-jokes – one character is named Adrienne Palmer – and a rushed open ending, in which the killer survives first degree burns that don’t even singe their hair and multiple machete slashes and then gives the clown mask to Tricia who wanders off into the woods with it. That’s the freakin’ end!

There is a third movie, which is called Within the Woods. I point blank refuse.

Blurbs-of-interest: Courtney Taylor played Mary Lou Maloney in Prom Night III, hence one of the characters is called Mary Lou. Tim Young was in Scarecrow, the other cheapjack franchise!

tagged with Friday the 13th, get your own ideas!, Nu-di-ty, rip-off central, sequel city, slasher, spoilers, summer camp, weird-ass twist, what the hell!?, who finances this crap!?