Valley of the Cheapjack Franchises: HORROR 101

More cheapo “chills” at the expense of my time and money exploring the films that I only advise you to avoid – this time I stroll down the memory lane populated by the dismally boring Horror 101 and it’s sensationally titled sequel, Horror 102, which came to me some time ago in a double pack with a freebie third film called Museum of the Dead. 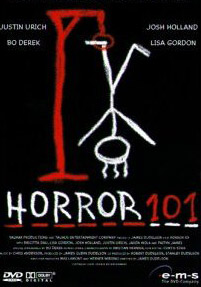 A weird one for VeVo as Horror 101 is one of those sonofabitch films that merely pretends it’s a slasher film, revealing that it’s some PG-13 film club production shot in four hours when it’s already too late!

To be truthful, I can’t remember much about Horror 101 other than the wake of anger I was left treading water in once my DVD player kind of spat the disc out in disgust. I don’t keep notes on non-slasher films so I’ll try and sum it up for you in as detailed a manner as I can:

Film class stays after hours for some seminar on horror. Or the emotion of fear. They have made some films of their own. Nobody likes one of the guys who is outcasty and therefore suspicious. Bo Derek is their teacher. They all begin wandering off to investigate strange noises or look for whomever wandered off to investigate a strange noise three minutes earlier.

BUT, people aren’t stabbed or sliced – they just vanish into thin air until a grandiose twist is unveiled. But it sucks. It really sucks and I stared slack-jawed at the screen asking some higher force why it was that somebody would every create this abortion of horror.

Weirdly, outcasty guy was played by Justin Urich, who also appeared in this film called Serial Killing 101, which also turned out not to be a slasher film despite pretending to be one also. That strangeness aside, play hookie and skip class. 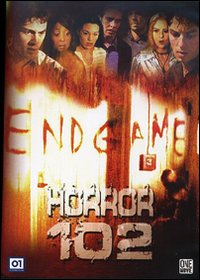 Dire-logue: “What are you gonna do, marinate me?”

Yes, it’s better – by half a star. But that’s only because it’s enough of a slasher flick to count. So don’t skip out merrily thinking you’ll be entertained by repeated viewings.

This time, a group of mixed students have agreed to take part in a psychology experiment as an act of atonement for a variety of campus misdemeanours. They’re to spend an unspecified amount of time in the closed down Bellepark Asylum, where they’re duly stalked and slain by a hooded killer. I only noticed then typing out the cast roster that one of the actors from 101 returned to a different role.

While the most measly of measly margins better than 101, it’s nevertheless an endurance test: murders are largely off-camera or shot in such a way as to restrict the bloodshed in order to pass for a PG-13 rating again and there’s some nonsensical gibberish about hauntings and LSD trips thanks to laced-bread!

Characters are the usual hodge-podge of genre stereotypes and, at one point, one of them takes charge and tells everyone to stay together before announcing he’s going to check on somebody else alone… What aids the film in the end is the twist, which is not as predictable as it initially seems but it’d still need a goddamn miracle to scrape even a complete second star.

tagged with after they were famous, death on campus, I want to die, slasher, weird-ass twist, what the hell!?, who finances this crap!?