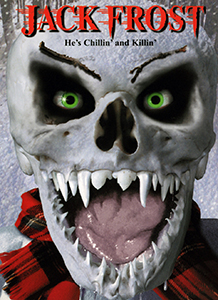 Laughter Lines: “Do something!” / “Like what – teach him how to shoot better!?”

Yes, it’s a killer snowman. It’s two films about a killer snowman. Shot in 1993-94 but not completed until 96 and then released in 97, Jack Frost was intended to have a $30m budget and Renny Harlin in the director’s chair.

Whatever stopped that happening is a mystery, but the final product is a trite but sometimes fairly amusing horror comedy slasher, one of the last before Scream came and changed everything.

Mad serial killer Jack Frost (MacDonald) is being driven across Colorado on route to his execution when the prison transport collides with a truck carrying some weird acid, during a snowstorm. Poor Jack is melted by the chemical, which stores his DNA in the snow, turning him into an abominable snowman who feels fit to take revenge on the smalltown sheriff who caught him. Oh look, said town is located right where the accident happened!

Jack can turn to water and morph under doors n’ stuff, and uses a variety of comical methods to off the locals, including decapitation-by-sled, axe handle down the throat, and an icicle in the head. The Sheriff (Allport) and pals take on Frost with an army of hairdryers in an effort to melt him.

Fun once, but prep your eyes to roll at the relentless assault of lame one-liners. And still better than the Michael Keaton film of the same name that came out in 1998. 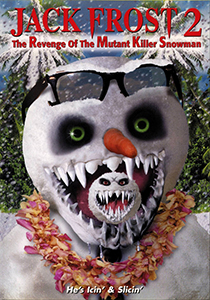 Looking as if it was made on a tenth of the budget of the first, Jack is resurrected as the snowman when scientists spill coffee on his corpse!? He tracks arch nemesis Sam Tiler and wife to a Bahamian island, where it all goes a bit I Still Know What You Did Last Summer with Gremlins-style offspring snowballs thrown in.

Barely a drop of blood and the removal of the brief nudity could probably see the rating dropped to a PG with ease; the gags don’t even hit that so-bad-they’re-good low hanging branch; and the sub-one-dimensional characters are just annoying.

This is one franchise that needed to be microwaved.

Blurbs-of-interest: Chris Allport was in Savage Weekend; Eileen Seeley was in The Baby Doll Murders; Shannon Elizabeth was in Scary Movie; Rob LaBelle was in Wes Craven’s New Nightmare; Stephen Mendel was in Stepfather III.

tagged with before they were famous, Nu-di-ty, sequel city, slasher