Valley of the Cheapjack Franchises: SCARECROW

Call me good, call me bad, call me anything you want baby… Today, lazy will do. Yes, it’s three reviews in one hit. Why? Well, is there any point in really going into detail over a trio of films with about as many distinguishing features as Tom Sizemore’s career prospectus? Avoid thy Blockbuster bottom shelf no more – it’s the Scarecrow “trilogy”… 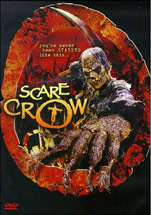 Lonely teenage dork Lester is to his school what a Rubik’s Cube is to a cow: useless. Possibly because he looks 35, he is tormented by the popular kids until be makes a friend in Sheriff’s daughter Judy, played by Pink-lite Shepis. But when Lester sees her kissing one of his bullies, he storms home and picks a fight with his mom’s trailer-trash boyfriend, who ends up strangling Lester in a nearby cornfield, beneath its scarecrow centrepiece and setting it up to look like a suicide.

A short time later, a back-flipping, wise-cracking scarecrow, now possessed by Lester’s vengeful spirit, returns to town to get his own back. Most of the murders are sloppy sickle deaths but there’s also a spade in the neck and death-by-frying-pan. Curiously, there’s only one female victim, Lester’s nasty teacher who gets a board-pointer in the head, odd considering the abundance of female characters.

The Troma-rooted production department do their best to make this outing look good and for the most part they manage to paper over the budget cracks efficiently enough, but poor acting and odious retorts from the rather piss-poor looking foe turn it all into a damp squib. All the same, it’s a cheap night out kinda deal (considering it was shot in 8 days!), which gives thanks to Dario Argento and several famous horror icons in the credits! Bless. 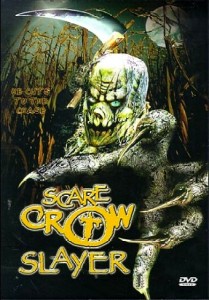 Dire-logue: “You know, you have a real small penis for a guy who’s a real big dick!”

Scarecrow uno may have been cheap but it looks like a billion dollar project compared to its skid row follow-up, with which was shot back to back. Tony Todd – appearing purely for the paycheque, I must assume – is a nutty farmer who saw his daddy impaled on a pitchfork by a scarecrow when he was a sprog and has since guarded his own ‘crow with a frenzied grin on his face.

When two frat pledges show up with the intention of stealing it, he accidentally shoots one of them dead. Dead dude’s soul is sucked into the scarecrow and he spends the rest of the film following around his Jennifer Love Hewitt-after-bad-reconstructive-surgery girlfriend, killing randoms for no identifiable rhyme or reason. Maybe when you become a scarecrow that looks as convincing as a nine-year-old’s homemade Halloween costume the trauma is just too much to take?

Dorky Lester had motive but the scarecrow here, mercifully devoid of one-liners, has no reason to do anything it does. The other frat boy, Karl, who’s a little bit special in an eerie way, spends most of the time trying to persuade people to go back to the field and fails to react credibly to almost everything that occurs. Karl sacrifices himself and somehow becomes another scarecrow and the film ends with the two of them duking it out like two kids making a home movie tribute for their WWF fandom.

CGI gore-jobs, horrible acting and some of the most stupid characters on celluloid digital ass-rape any enjoyment out of this one, although Jessica Mattson supplies a couple of light chuckles as the ditsy girlfriend of a frat brother. But that’s it. 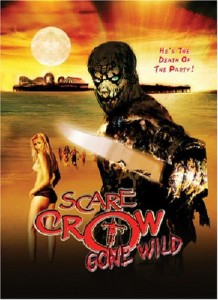 “He’s the death of the party!”

Dire-logue: “If I hear the words “let’s split up,” I will bitch-slap the both of you.”

The rest of the team and their bimbo girlfriends head off to the beach for Spring Break where carnage of a pavlovian extent unfolds as the scarecrow turns up (yes… it’s a scarecrow on the beach) and sickles them all. The duo of good kids figure out that they need to bring their friend out of his coma to stop all the killin’ but for everyone else it’s just too damn late.

Like the first two films and many other cheapo efforts, the script is hampered by annoying melodramatic altercations between the testosterone-fuelled cast members (“who are you calling bitch, bitch?”) but thankfully they all die. The scarecrow even runs one of them over in a truck! The overlong finale tries to add some tension and fortunately the happily-ever-after ending is skewered in a barrage of gory violence a few (screen) weeks after the massacre (which everyone else has forgotten about).

Blurbs-of-interest: Tim Young was in Camp Blood; Belinda Gavin was in Final Examination; Mark Irvingsen was in When a Killer Calls; low-end horror queen Tiffany Shepis has also been in Bloody Murder 2: Closing Camp, Dead Scared, Home Sick, Victor Crowley, and had a blink-and-you’ll-miss-it role in Detour. Tara Platt was in Back Slash. Tony Todd was also in Hatchet, it’s sequel, and the first two Final Destination films (as well as contributing a voice to the third) and also iMurders, Jack the Reaper and Hell Fest; Brian Katkin also directed Slaughter Studios.

tagged with sequel city, slasher, star power, what the hell!?