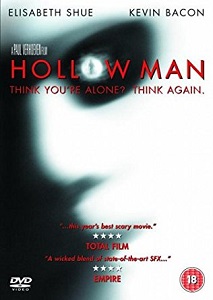 It’s doubtful the director of Total Recall and RoboCop would approve of anybody dubbing Hollow Man a slasher flick and most reviews at the time seemed oblivious to the pretty by-the-number stalk n’ slash opus that takes up the final act of a very ambitious movie.

Kevin Bacon is at centre-stage (sort of) as self-worshipping scientist Sebastian Caine, pioneer of a government project that turns living things absolutely invisible thanks to your go-to miracle serum. After initial and successful tests on animals, Caine volunteers to be the first human guinea pig in a scene that – at the time at least – was amazing enough to earn the movie an Academy nomination for best FX work (it lost to Gladiator).

He uses his new invisibility to do what most narcissistic heterosexual guys would do – he spies on his female co-workers, plays pranks on the other team members and is generally an ass.

However, when neither he nor the team can crack the restorative process, the consequences of having no reflection, no eyelids to enable sleep, and little conscience to begin with, Caine begins sliding down the rabbit hole. The latex masked made so he can be seen by the others is later removed and he discovers that former squeeze Linda (Shue) is now involved with other co-worker Matt (Brolin). Their lack of progress and Caine’s changing personality prompts a plan to confess all to the Pentagon and take their punishment for the deception. 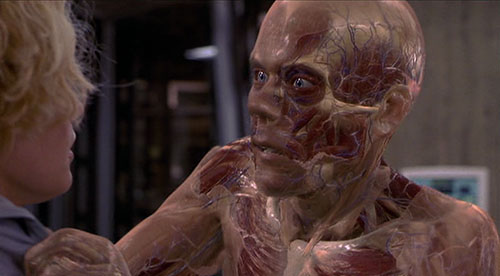 Predictably, Caine won’t have it and resolves to locking the rest of the team in their underground laboratory and killing them one by one. How’s that for a masked killer?

Gory stuff but not in the usual slashed throat / decapitated head way – the transformations in and out of invisibility are graphic as we’re given explicit glances at the interiors of the body, which isn’t so pretty – and Bacon happily goes full frontal again, levelling the objectification-by-gender table.

The FX work is the star here, and the film straddles its hybrid sensibilities between sci-fi, action and horror comfortably, almost as if it’s been concocted in a lab itself, with elements of Scream married to The Invisible Man and coated in Verhoeven’s clinical style of direction and Shue makes for a spunky heroine.

Listen out for the awesome Wonder Woman joke. 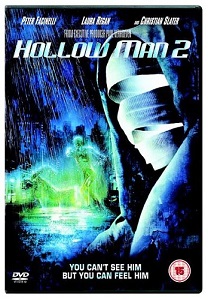 “There’s more to terror than meets the eye.”

Laughter Lines: “You’ve really outdone yourself this time, usually when you people make a mess at least you can see it.”

Verhoeven returned as executive producer for this efficient enough straight-to-DVD sequel, in which the last of three invisible assassins from the DoD’s ‘Silent Knight’ operation is desperately trying to track down Laura Regan’s biologist, the only person with the knowledge to prevent his body deteriorating the same way as his predecessors.

In the meantime, he’s happy to eliminate anybody who gets in his way as well as various government high-ups responsible for his condition. For the most part, this is a chase-flick with biologist and the cop assigned to protect her on the run from Mr Invisible.

While clearly made for a helluva lot less than the first film, it’s still a handsomely put together and what visual FX are in play are done well enough, if not as CG-centric as before. Where a bit more investment could’ve helped is in the script itself, which, although armed by a good enough story built around the future of the project (events from HM1 are briefly referenced), there doesn’t seem to be very far to go with it. Perhaps it would’ve worked better as a TV show?

No more or less slashy than before; there’s a naked teen tryst in an early scene where, of course, when it’s time for the guy’s clothes to come off, the girl gets spooked so we only see her boobs and nothing of him. Yawn.

Blurbs-of-interest: Kevin Bacon was an early victim of Mama Voorhees in Friday the 13th and later head counsellor at a summer camp in They/Them; Christian Slater was in both Mindhunters and Playback; Laura Regan was the heroine in My Little Eye; Jessica Harmon was in Fear Island; William MacDonald was later in There’s Someone Inside Your House.

tagged with after they were famous, Nu-di-ty, sequel city, slasher, star power, yo! Hollywood