Valley of the (not so) Cheapjack Franchises: The Texas Chainsaw Remakes

Probably unpopularly, all of The Texas Chainsaw Massacre canon ranks as one of my least favourite series’ in horror. The 1974-1994 set (plus that godawful 2013 instalment) do next to nothing for me, but what of the Platinum Dunes/Michael Bay ‘re-imaginings’? 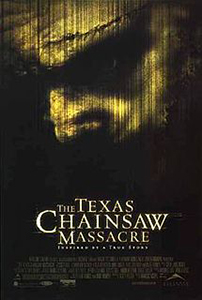 “What you know about fear…doesn’t even come close.”

Michael Bay has much to answer for, and I imagine a mob of horror fans would crucify him for being the poster boy of the remake era, which was a quiet zone of horror filmmaking around 2003, until the announcement of a “re-imagining” of The Texas Chain Saw Massacre.

Twelve years on, it’s an easy equation to comprehend. The 1974 film was notorious, banned in numerous countries, and had a name that is far more suggestive than any of the content. Sooner or later, someone was going to say “Enough with sequels! Remake it!”

Fortunately for me, I have no strong feelings towards the original. I first saw it at a midnight screening in the late 90s and it was a headache of a film. My friend turned to me halfway through and said: “This is probably the most fucked up thing I’ve ever seen.” I found it entertaining enough, but not the monstrosity we all expected (same with The Exorcist, which also lost its UK ban in the same time period), and nothing I really cared about seeing again. 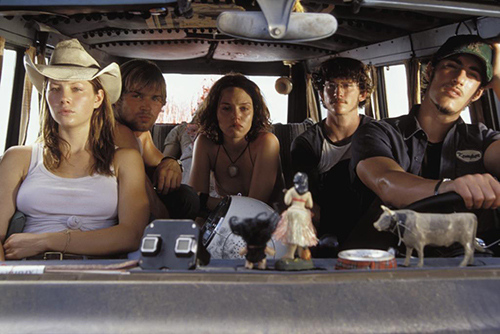 The 2003 over-do remains traceably loyal to the ‘true’ story: A van of five teenagers, on their way back from Mexico and on to see Lynyrd Skynyrd, roll into a nightmare. Stopping to help out a girl walking down the road is the grave error they make, as she wastes little time in putting a pistol in her mouth. They find that summoning help is difficult and the locals seem less than fazed about their dilemma, one which they soon argue about: Leave the body and scram, or wait for help?

From here, the Dead Teenager conventions come into play: Two of the group go to the creepy house nearby where one vanishes, looking for him reveals Leatherface, who gives chase wielding the titular weapon. Toss in the imitation-Sheriff (inimitably played by R. Lee Ermey), who the kids wrongly trust, and they sink deeper into the nightmare. 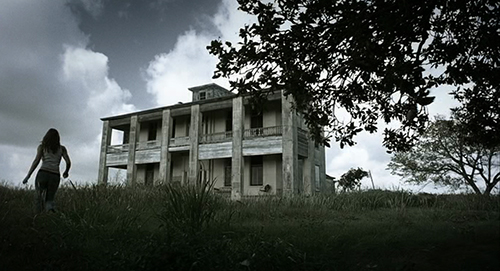 Before long it’s all down to off-the-marks final girl Erin (Biel), whose luck just keeps getting worse: Everybody she calls on for help is part of the extended family of loons, and she’s soon at their mercy until she manages to escape. From there, it’s abrasive cat and mouse scenes as Leatherface stalks her through the woods, an abandoned shack, eventually to the abattoir.

Whereas the old film pre-dated our understanding of killed-one-by-one plot structure, and is therefore only arguably a slasher film at all, there is no such uncertainty in the remake: We know Erin is going to be the last one standing, we know the others will be laid to waste (it’s just a case of picking the order in which they go), and we hope she’s able to exact a gruesome revenge on her captors. 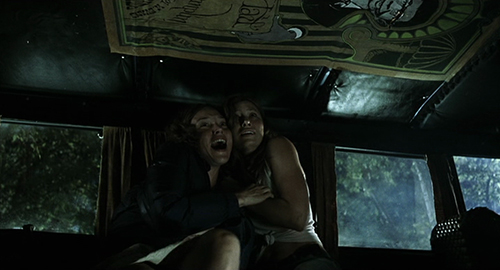 So everything works on a mechanical level, but the over-stylized look of the film begins to work against it after awhile, and the fact that Wrong Turn had been released just a few months earlier hoovers up much of the ‘originality’ of the ‘re-imagining': Dirt, grime, rednecks who don’t give a shit.

Everything is very dark and earthy, supposedly to give it an authentic look, but at times it goes too far, while it clashes with the youngsters, who aren’t convincingly ’70s kids’ at all, no matter if you deduct cellphones and brand names, the language they use and even their names are too contemporary to wash. Gunnar Hansen – the original Leatherface – pointed out that the film was shot at chest-level to keep Jessica Biel’s bust in the frame as much as possible, not to mention the moments where her white blouse gets very, very wet. 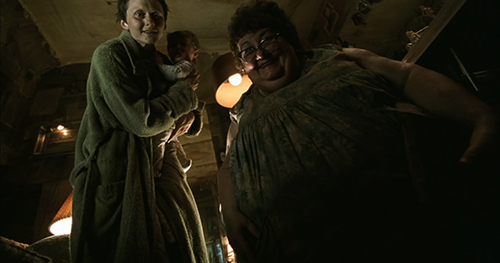 Roger Ebert famously gave this film a rare no-stars, and his reasoning is valid enough, but it’s still a solid remake, not too entrenched in the cynicism which was to come with every other horror title they began stuffing through the machine. It’s just that they ‘re-imagined’ it with too little subtlety, so it’s more of a box-ticking exercise than a grafted horror experience.

Blame it for ushering in the dawn of the remake, but enjoy it for breaking out of the tame, studio-slick horror that was beginning to wane in the wake of Scream. 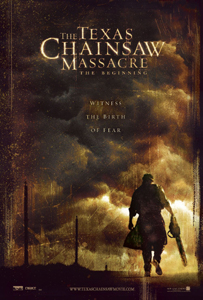 THE TEXAS CHAINSAW MASSACRE: THE BEGINNING

“Witness the birth of fear.”

While I remember going to see this at the movies with my pal Earl, I don’t remember buying the DVD, but there it was on my shelf, possibly unwatched.

As the 2003 film ended the trail of horror left by Leatherface and the Hewitts, the only logical next step to cash-in on its success was to go back… back to “The Beginning”. Ish.

Starting with a very brief 1939-set intro that sees Thomas Hewitt born in a meat-packing factory, while the credits whirr, there are old sepia photos and doctor’s notes about his deformity and within minutes it’s 1969 and Tommy loses his job at the slaughterhouse when it’s closed down as the town dies (economically, it’s not chainsawed to pieces). 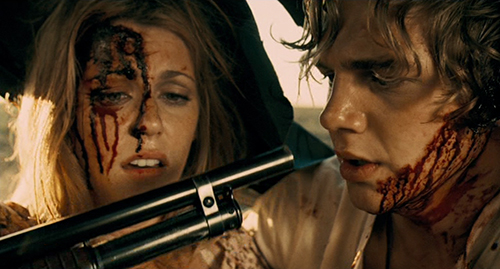 He flips and kills the owner, leading to his clan intervening and ultimately shooting the local Sheriff (“the only law enforcement left”) and taking up cannibalism in the blink of an eye.

Elsewhere, a jeep of two couples heading to Austin where brothers Eric and Dean are going to enlist and be carted off to Vietnam, hurtles towards the Hewitt residence. With their girlfriends in tow for one last weekend of fun, it all goes to shit when they’re accosted by a motorcycling robber, hit a cow at high speed, and crash.

They believe they’re in luck when ‘the Sheriff’ turns up almost immediately, but when he guns down the would-be robber, something seems just a bit more than ‘off’. Eric’s girlfriend, Chrissie, was hurtled into the long grass in the crash and hides while her friends are assaulted and driven away to be tortured and eaten.

The rest of the film is largely a re-tread (pre-tread?): Chrissie sneaks her way into the house to try and save them, but is too late and eventually ends up caught and invited to dinner, in a scene reminiscent of the 1974 film that was never ‘re-imagined’ into the remake. So samey is it, that she’s chased through the woods to the slaughterhouse for the finale! And, being that we know the Hewitts weren’t caught for a few more years, things don’t look good for anybody surviving this one.

Production values are high, as before, this time with Jonathan Liebesman’s slightly more grounded direction, but whatever appealed to me in 2006 has since gone: Watching the film in 2015 was a pure endurance test. On the one hand it brings nothing new to the table, a few explanations of character attributes aren’t reason enough to make a whole new movie, and it also made contact with, and crossed, my ‘line’. 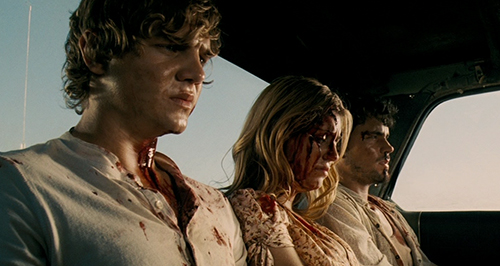 My ‘line’ exists where fun entertainment ends and cruelty begins. While the 2003 film wasn’t exactly doing cartwheels of joy, it was exhilarating without being stupidly violent; Here, the film practically revels in demonstrating how gross it is, with peeled off faces, blood rain, chainsaw vivisections… But not an ounce of a good time. A scene in which a dying character says they can no longer feel their limbs and are cold is upsetting, not exhilarating.

Plenty of people will say “well, that’s real horror” etc., but horror is like comedy – we all find different things acceptable or funny. A horror film without the re-equilibrium is just depressing, which is why the first one gets a pass and this doesn’t. There’s no element of mystery or surprise, and rooting for a survivor is futile – The Beginning is just killing for the sake of it.

The film skates over how quickly the family turns from struggling to evil, embracing their newfound cannibalism in what must be no longer than twenty-four hours, and the script makes Ermey the focal point over and above both Leatherface and the tormented teenagers, unable to realise that what made him so good before was moderation. He’s a one-liner away from Freddy Krueger levels of camp at times.

In the much thinner plus column, Jordana Brewster is a solid heroine, slightly more believable than Jessica Biel was as a child of the time. She has an opportunity to escape without being detected, but is loyal that she goes back to try and save a friend she can hear screaming elsewhere. It’s that pivot scene that tells us a lot about her character – she’s admirably unselfish, regardless of the eventual cost.

A depressing experience in all, although better than the original sequels and the 2013 film, serving only to compound my resistance to this series as a whole: It’s just not very good.

Blurbs-of-interest: Erica Leerhsen was also in Wrong Turn 2 (ha!), Mischief Night, and Lonely Joe; Terrence Evans was in The Pumpkin Karver; Diora Baird was in the even worse Stan Helsing; Lee Tergesen was in The Collection; Cyia Batten was in Killer Movie; Andrew Bryniarski was in The Curse of El Charro; Marcus Nispel directed the Friday the 13th remake; Jonathan Liebesman directed Darkness Falls.

tagged with before they were famous, get your own ideas!, gore o'clock, remake, slasher, slasher films that aren't supposed to be funny but are funny, spunky final girl, yo! Hollywood