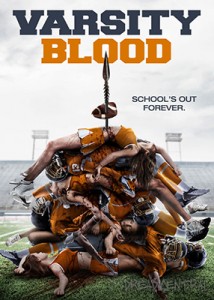 Laughter Lines: “Stop screwing with me and get in here and screw me already.”

Filmed in the same school as 1999 football-is-life flick Varsity Blues (and incidentally the high school of director Jake Helgren), this Texan ode to all things 80s-slasher follows a group of jocks and cheerleaders as they prepare for a private Halloween night shindig after a successful game.

It also happens to occur one year to the day since the principal’s daughter died in an alcohol-fueled mishap. Hmm, are you thinking what I’m thinking?

I was thinking about Moldova’s 2012 Eurovision entry. So probably not. 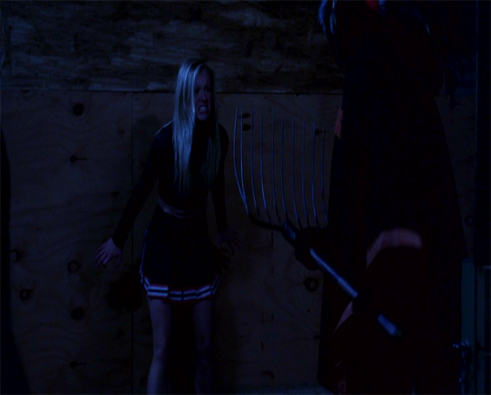 New girl-cum-cheerleading pro, Hannah (Lexi Geophysionomics), is under strict orders from Mom (Debbie Rochon) not to hang out with her sports pals, who are clearly colluding to keep the details of last year’s accident a big fat secret. But somebody knows… Somebody who dons the costume of the Hogeye Warriors’ mascot – a Native American Apache – and sets about laying the guilty teens to waste for their sins. And he’s nifty with a bow and arrow.

While some viewers will doubtlessly want things to hurry up and get to the killin’, this section provided an engaging, almost celebratory look at Americana and the customs of small-town-high-school life before destroying it. 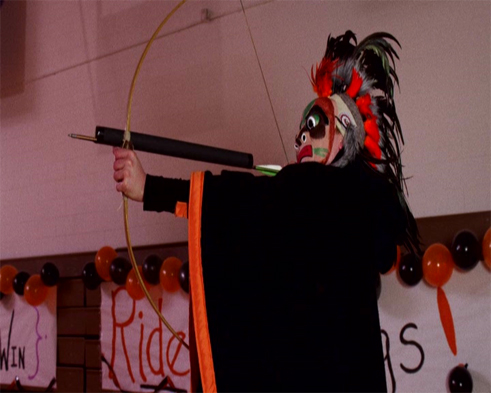 Who is the killer? We have a pretty good idea as to why he or she is doing what they are, but with an array of background suspects, Hannah is thrust into a real Scooby Doo of an unmasking. I didn’t guess correctly, but on the other hand I wasn’t blindsided either.

As a real love letter to all things slashtastic and 80s, Varsity Blood - just like its sister film Bloody Homecoming – harks back to the glory days, with a myriad of nods to Friday the 13th, Prom Night, The Prowler, and almost any other motive-driven teen slasher from 1981 (there was even House of Death vibe, albeit not as trippy). 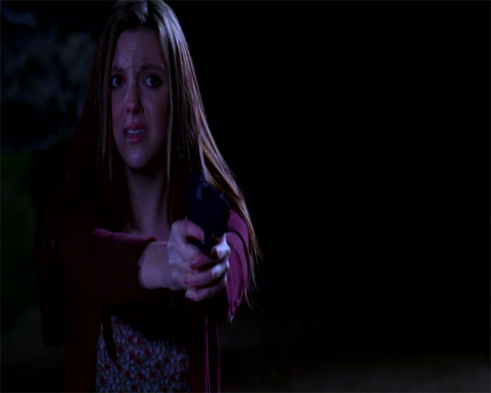 Some occasional wobbly acting notwithstanding (what 80s film would be complete without a line like “I thought I saw somebody watching us from behind those trees…”?), given that the production budget is a fraction of even Halloween‘s 1978 costs, the look of the film is pretty damn impressive.

It may not be difficult to predict the turns that VB makes, but therein lies its base appeal: It’s uncompromisingly a straight-up slasher film and pretends to be nothing else, and that’s what makes it a fun ride.

Blurbs-of-interest: Lexi Unpronounceable and Jesse Ferraro were both in Bloody Homecoming; Debbie Rochon’s low-budg. horror resume is extensive to say the least, including Bleed, Blood Relic, Head Cheerleader, Dead Cheerleader, and American Nightmare among others.