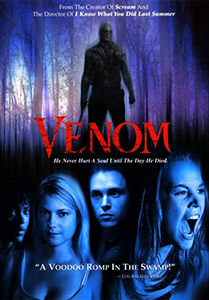 “He never hurt a soul until the day he died.”

Kevin Williamson produced this ill-failed feature, for which he was reunited with I Know What You Did Last Summer director Gillespie. It ended up being released within days of Hurricane Katrina – not good for a Louisiana-shot, voodoo-centric teen horror film. Predictably it tanked, raking less than $1million.

In spite of this misfortune, Venom is a handsome critter, which benefits from above average production design, and a brutality absent in other recent slasher films. And there weren’t many around theatrically in 2005. Initially, the film was conceived as a backstory for a pending video game, Backwater, which featured an antagonist known as Mr Jangles. Whether that ever surfaced I do not know.

A mambo priestess in the deep south retrieves a suitcase full of snakes possessed by the evil of people whose bad mojo they’ve sucked out in a ‘milking ceremony’. Whilst transporting it to safety, she, grimy local mechanic/outcast Ray Sawyer, and sexy teens Eden and Eric, are involved in an accident on a bridge, which culminates with the hulking Ray trapped inside the sinking car with the loose snakes.

Ray’s body is retrieved and the mambo also dies from her injuries, but the former is soon up and about, killing the coroner, Method Man’s deputy (what happened to him!?), and a string of teens leading back to the mambo’s house, where her granddaughter CeCe (Good, who is, uh, good) is mourning her loss. 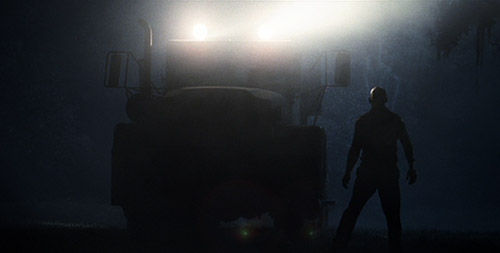 Meanwhile, the demon-formerly-known-as-Ray sandblasts a light-fingered teen to death before heading in the direction of the house where the depleting teens gather to comfort CeCe. After finding their VW Beetle turned on its head (at least it wasn’t completely trashed, gorgeous thing that it is) the assault begins with a ripped-off arm, death-by-crowbar, and even house-wrenched-in-half when CeCe’s voodoo powder-scattering blocks his entry.

Venom goes to some lengths to provide creative demises for all involved, but by doing so adheres to that is-it/isn’t-it true stereotype of killing the black characters first: The first three murdered aren’t white and the ripe opportunity to finally cast a black girl as the heroine is squandered.

That said, Agnes Bruckner, as Eden, does just fine with the role – running and retaliating where required and I’d forgotten just how long the third act of Girl vs. demon-formerly-known-as-Ray carries on, so her dues are well and truly paid.

Despite reliance on some real contrivances – one of the teens is Ray’s illegitimate son, perfect to make a voodoo doll with – there’s much to enjoy here, from the swampland locus (although why does nobody have a southern accent?) to the comparably luxury production qualities. The characters blue together somewhat, with little to them beyond final girl Eden wanting to go be a doctor in New York, her boyfriend moaning about it, the gay boy, the drunk boy, and a host of ‘other ones’.

Venom isn’t likely to be regarded as a classic by any metric, but it’s definitely worth a look for its surface gloss appeal alone, which is rare in low-end slasher fare, and some MTV hyper-edits aside, ticks all the boxes a fun horror ride should.

tagged with after they were famous, gay stuff, gore o'clock, slasher, spunky final girl, yo! Hollywood