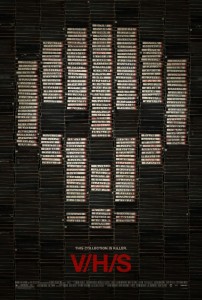 “This collection is killer.”

In horror, the only thing worse than over-explaining something is not explaining it at all. That is, to say, if it REQUIRES explanation. A smart film will drip-feed you enough information for to draw your own conclusions.

V/H/S, a new anthology of the “found footage” sub-set may have traded on the ever more common retro/throwback hype-o-meter that people tend to wheel out as an excuse for gore and tits, as if one is even needed.

However, in the case of this picture, which I saw at London’s FrightFest, the complete lack of explanation for four of its six tales (including the ‘arcing’ story) sunk it quickly and, if post-viewing murmurs were to be heeded, few people in the audience thought it was that great.

It goes thusly: four annoying twats are hired to go steal a video cassette from a house. Why? Dunno. Who hired them? Dunno. What’s on the tape? Dunno. They break in, and find the inhabitant has expired and begin to search for the tape. Unlike the cover art, there is no great wall of VHS tapes, but several scattered around, which they choose to watch.

The first story is a guys-night-out affair filmed through camera-glasses. Three idiots pick up chicks, go back to party, one of them ain’t right. It wraps itself up well enough. Story #2 is the travelogue of a young couple, which has a suitably creepy midriff, let down by a random twist lobbed in from nowhere that is neither clear, nor in any way smart.

Next is Tuesday the 17th. Four kids in a car go to the woods, invisible and/or magnetically charged killer, who screws with the playback, does them in. An amusing riff on Paranormal Activity permeates the fourth story, which is a selection of Skype conversations that has some decent atmosphere, laughs, jumps, but is ultimately ruined – yet again – by a real head-scratcher of an ending.

The final story echoes the opener, with four guys out at Halloween, who turn up at a party with a decidedly unenthusiastic vibe. It’s probably the best segment out of the lot. The finale of the ‘arc’ story yields no answers either, ending predictably but without the bang needed to make the audience go “ah!” and tie it all together.

Shaky-cam syndrome was to be expected and is no big deal, but uneven acting, largely unsympathetic characters, and the feeling that very few ideas were thought through beyond the most basic of concepts are the concrete boots that drown V/H/S in the end.