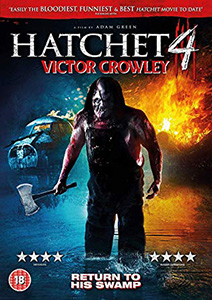 “Return to his swamp.”

Laughter Lines: “The guy’s so full of shit, he could open a shit restaurant with… shit.”

The Hatchet series and I aren’t the best of buddies: The first one was so-so, the second one an enjoyable improvement (not least because I was sat just a few feet from the leading cast members and Adam Green where it was screened), and the less said about the third one the better. So, it was with considerable hesitance I approached the ten year anniversary one, a sort of H20 for much-abused Parry Shen, who, with Kane Hodder, is the only cast member to grace all four instalments.

Adam Green always seems to be bursting with enthusiasm whenever I’ve seen him interviewed at various FrightFest thingies, so I’d hate to not like his output. Fortunately, Victor Crowley is quite possibly the best of the series so far. That’s not to say j’adored every single one of the 80 minutes, but it certainly struck the best balance between grue and LOL moments, which give it an endearing appeal. Its three predecessors had it too, but the wit is sharper this time around.

Andrew Yong (Shen) was the only survivor of the Honey Island Swamp massacre of 2007 (his paramedic role in the third one) and has cashed in where possible and written a book about his experiences. Naturally, various conspiracists think he was the killer and that Victor Crowley is just the same old legend it always was. After appearing on the daytime talk show hosted by his bitchy ex-wife Sabrina (Brown), his walking pharmacy publicist Kathleen (the ever-adorbs Felissa Rose) convinces him to say yes to the offer of $1million to fly over the swamp while they film is reaction to returning there.

Anyone who’s seen Jurassic Park III will know what’s going to happen. The plane crashes, killing some of those aboard, and stranding the rest right in the spot where Crowley prowled and, thanks to a young filmmaker, is resurrected after the voodoo curse that brought him back before is inadvertently recited via a YouTube clip on someone’s phone.

The remainder of Victor Crowley is a dilemma flick where those stuck inside the slowly sinking fuselage try to work out their escape route without being on the receiving end of an axe, belt-sander (“somebody actually left a belt-sander out here for ten years!”), or their own hand being inserted up their… well, you’ll see. Each and every contrivance gets its own gag to play off the myriad of convenient turns that most slasher flicks take, showcasing Green’s considerable comic timing as a writer (learned from Holliston, no doubt); the film drips with as many jokes as it does body parts and Green is clearly having a ball attending to each and every facet – though the male nudity to equal out the usual T&A excesses was a choice.

Where to go from here? Given the mid-credits scene, we could well be seeing a fifth film before too long, but how many more horror faces can Green possibly knock off? Here we see Tyler Mane, Tiffany Shepis, and Felissa Rose in peril, joining the ranks of Robert Englund, Tony Todd, Caroline Williams, Zach Galligan, John Carl Buechler, Derek Mears, and Josh Leonard. Coming early to the (probable) wave of reunited scream queens and killers a la Halloween is a smart move – perhaps Tobin Bell, Heather Donahue, and some Saw or Final Destination cast members next time?

Blurbs-of-interest: Parry Shen and Tiffany Shepis were both in Dead Scared; Shepis was also in Basement Jack, Bloody Murder 2, Scarecrow, and Home Sick; Dave Sheridan was in Scary Movie; Felissa Rose was Angela in the original Sleepaway Camp and its third sequel, and also was in Camp Dread (with Danielle Harris); Tyler Mane was Michael Myers in both of Rob Zombie’s Halloween films; Danielle Harris was in Halloween‘s 4 and 5, plus both Rob Zombie films, Blood Night, ChromeSkull: Laid to Rest 2, See No Evil 2, Urban Legend, and was an extra in The Town That Dreaded Sundown; Kane Hodder was Jason in Friday the 13th‘s 7-10, and appears in Children of the Corn V, Behind the Mask, and Hack!; Joe Lynch who directed Wrong Turn 2, cameos as one of the pilots (the other is Adam Green).