While I often opine that the 2009 Friday the 13th reboot peaked in the opening 20 minutes, with the rest of the film merely a serviceable slasher yarn, one character really stood out in the group of college kids on the conveyor belt of death… It’s Chewie! (who I thought was named Troy for ages). 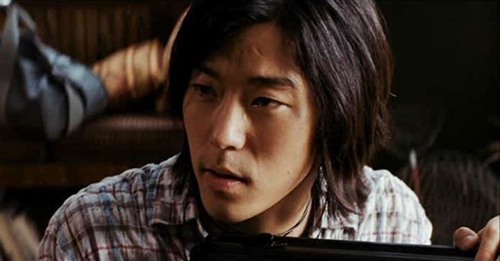 Why is he there? Dorm-dwelling collegiate, bong-enthusiast, best bud of Lawrence, and pretend-friend to the arsey rich host, Trent, Chewie is on the trip for the chance to see how the other half live. Not because he likes Trent or anything. Duh.

What does he want? Like most boys who visit the shores of Crystal Lake, Chewie just wants to get stoned and get laid, preferably by Bree, but admits he has more chance of fucking a penguin.

Why we love him: Yoo was able to inject so much into what amount to probably less than 15 minutes of screentime with pitch perfect delivery of lines, even babbling to himself as he drunkenly explores the toolshed and helps himself to rich folks’ wine.

tagged with Friday the 13th, I love Jason