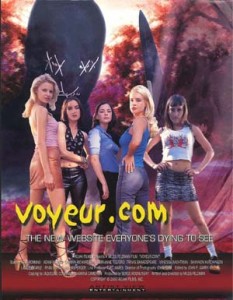 Exploitation horror sometimes requires a bit o’ sleaze. Is there anything that bad about a dash of sleaze? Sleazy-sleazy-bo-beazy, banana-fana-fo-feazy, fee-fi-mo-meazy, Sleazy… OK.

Shy narrator and bargain-basement Winona Ryder look-alike Mary is worried because she has no personality and doesn’t sleep around like her housemates but facially-inept mastermind Alex likes her and that’s all that matters! Meanwhile, a masked killer begins knocking off the ancillary characters, including a dim-witted gardener-slash-perv. Aside from he and Mary, the others are the usual pick n’ mix of jocks, potheads, bitches and bimbos whose always-sexual conversations limit their vocab to ‘cool’ and ‘party’ and they are thankfully laid to waste, more often than not during the act.

The most memorable sequence (also known as the only one I didn’t forget ten minutes later) is when the aggressive lesbian goes down on a Pammie Anderson-a-like, who sees the killer approaching but is, y’know, unable to get out of the way! There’s also the obligatory Scream-lite opener that doesn’t remotely connect with anything else that happens.

For all these flaws in credibility, acting talent, photography, lighting, audio and plotting, Voyeur.com never became so bad that I wanted to kick the screen in and some of the characters here are still less pretentious, transparent and stabbable than those in Big Brother!

tagged with get your own ideas!, Nu-di-ty, rip-off central, slasher, who finances this crap!?