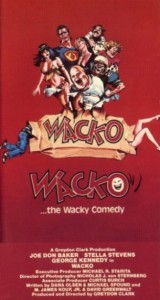 “The comedy that takes off where Airplane landed!”

Laughter Lines: “It’s Halloween, it’s prom night, there’s a psycho loose, so don’t open the door. Don’t answer the phone. Don’t look in the attic. Don’t go to the bathroom. Don’t go into the ocean and don’t go into space ’cause no one can hear you scream.”

The race was on in the early 80s to score the first slasher spoof, so Wacko went up against Student Bodies, Class Reunion, Pandemonium, and the misleadingly titled Saturday the 14th but ultimately lands near the bottom of the pack, eventually gaining a release at the start of 1983, by which time most of its content was dated.

Thirteen years after seeing her older sister sliced and diced by the Halloween Prom Night Lawnmower Killer of Hitchcock High, virginal Mary Graves is now being stalked by the maniac as her own Halloween Prom approaches. Oversexed students at the school are joined by ‘wacky’ teahcers, parents, and other fringe characters who disappear and reappear enough to be considered a suspect by the man hunting the killer.

Things get a little interesting by the time the killer starts work on Mary’s fiends, but any excitement worked up is short-lived for the revelation of the killer’s identity, virgin jokes galore, and a pie in the face for George Kennedy at the end.

Blurbs-of-interest: Julia Duffy was in the more straight-laced Night Warning in the same year; George Kennedy was also in Just Before Dawn; Charles Napier was later in Camping Del Terrore and Maniac Cop 2.