Watch a clown break down 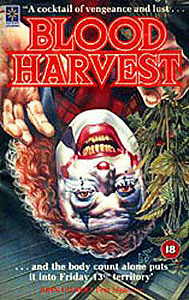 “The body count alone puts it into Friday the 13th territory,” – what, six? The lowest body count in any Friday is ten. You’re having a laugh! …Well, there is a clown on the box.

In actuality, the entire central cast is made up of only six characters and about two suspects as we “try” to suss out who is hanging out the locals of a small farming town to dry. Hint: the surprise count is zero.

Without question, the mystery has something to do with final girl Jill’s missing parents, who were blamed for sending all the farmers in town bankrupt. Weirdo clown Mervo – played by late Top Toe Through the Tulips songster Tiny Tim, here looking like a fired member of Kiss – is naturally the prime suspect. He hangs around singing to himself after flipping out because of his folks’ suicide. Jill, on the other hand, spends virtually the entire movie in her low-cut, loose-fitting, mini-skirted nightdress or naked.

Blood Harvest was cut by well over four minutes before reaching our shores on video in 1989 but would anyone really care about seeing that lost footage? It can’t make this abortion of a project any more appealing. That said, there are only two on screen murders anyway although the potential eeriness of the small farm town is used effectively enough but this one should be left unfertilized.

As with all lost 80’s horror films, the resident future star here is Peter Krause, most notable for his leading role in Six Feet Under.