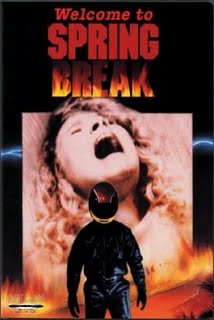 Dire-logue: “Welcome to spring break: the annual migration of the idiot.”

The leader of a biker gang is sent to the electric chair in the same week than 100,000 students descend on Venice Beach for their annual Spring Break knees up, sparking a series of intertwined events that begins with the electrocution of a pretty hitcher by a dark-visored biker…

Best buds Skip and Ronnie, meanwhile, have arrived for the week and start it off by upsetting The Demons, the biker gang to whom the recently departed (?) belonged, while pervert cop John Saxon skulks about threatening to send everyone to prison. Electrocutions continue with the leather-clad killer doing away with young vacationers and the odd local who gets in the way, including a girl who’s using her room to earn some college cash by screwing older men and the slasher movie fixture, the prankster, who pretends he’s dead one too many times…

Ronnie gets himself burnt beyond recognition and Skip teams up with waitress Gail, twin sister of dead biker’s victim, and they discover that the Mayor, Saxon’s ropey cop and a local doctor are covering up the truth and will do whatever they can to prevent the feisty duo from bringing it out into the open.

Lenzi, was actually fired from the movie at the start of production but stuck around as an advisor for his replacement, Kirkpatrick. Sadly, this leaves only a hell of a lot of unanswered questions and should-be victims who simply disappear from the story when, by rights, they should be frazzled to DEATH!!! There is, however, a sense of Nancy Drew fun to it all that doesn’t appear in contemporary mystery-slashers, marred only by the ridiculous outcome of the plot secrets and some cheesy 80’s music to top it off.