The Audacity is Coming from *Inside* the House… 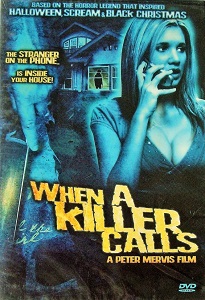 WHEN A KILLER CALLS

“The stranger on the phone… is inside your house!”

The Asylum has made a name for itself producing quick turnover rip-offs of about-to-be-huge releases – though these days they just seem to churn out films about sharks – and as the remake of When A Stranger Calls loomed, in the same month came this similarly titled, higher-bodycount pretender, which is more or less the exact same plot, but wasn’t it nice of them to put the twist on the cover in the form of a tagline!?

Cookie cutter hot girl Trisha turns up at her babysitting gig, explains that she “doesn’t sit for the Hewitt’s anymore” and strikes an expression that tells us exactly who the killer’s going to be. Or are they playing us? No. It’s exactly who you think it is.

The standard post-Scream calls come in – “check the kid”, “I’m going to kill you tonight…” blah blah blah – so she calls the cops. Her sexy boyfriend and his two loser tag-alongs show up, giving Mr Hewitt – I mean, the mystery killer - some extra fodder to stab, slash, and asphyxiate, before Trisha is taken hostage. The last half hour is pretty much her tied up and menaced by the mystery killer in some pretty disturbing ways.

The only daring instance that occurs here is that there are two on-screen murders of young children, a taboo usually not crossed even in the pits of exploitation horror, but that doesn’t make it a good film. As it is, it’s backed into a corner by the number of cliches it depends on. Let’s see a babysitter film where it’s a guy looking after the kids for a change.

Blurbs-of-interest: Kochan and Odesach were the leads in fellow Asylum rip, Halloween Night; Robert Buckley was also in Killer Movie; Mark Irvingsen was in both Scarecrow (2003) and Scarecrow Slayer.