Who knows what they’ll do next summer

With the age-compounding news that I Know What You Did Last Summer, a film from 1997 – also known as last week – is being remade (or ‘re-imagined’ as these bullshitty projects are now nominally dubbed), and the merciful slowing trend of grab-bagging any “sounds cool” film title from way back when and stuffing it through the Remake Generator 3000 – what, I ask myself, is left for them to plunder? Hmm… Why, God, why? The odds of this one eventually happening must be quite high – Wes Craven has seen Elm Street, Last House on the Left, and The Hills Have Eyes all remade in the last few years.

What would they do to it? Given the religious backdrop DB is set against, one can only imagine all manner of minority groups picketing it and being offended all over the show; though Craven had the sense to manufacture his sub-Amish society, I doubt whichever 25-year-old was put in charge of the production would be capable of thinking so logically. Expect the trio of heroines to wear the skimpiest of skimpy shorts and at least two of them make out with one another to tease the religious boys, ’cause, you know, nobody but straight men watch horror films.

Should they? The original isn’t that well known and the story is solid enough. Only would this be acceptable in mature, craft-heavy hands. 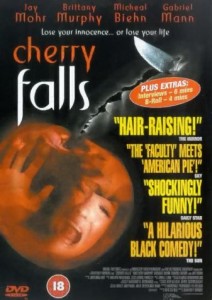 Why, God, why? If you’ve ever encountered the original script for this one, you’ll know it was way more awesome than the finished product, albeit getting most of said awesome from it’s fucking cool central plot device: The killer only goes after virgins!

What would they do to it? As all media ever now pretty much endorses underage sex, I foresee a PG-13 production along similar lines to that wretched Prom Night re-do, wide-eyed, under-studied teen stars (at least three of whom will also be singers) shrieking a lot and talking sensibly about sex and the responsibilities thereof.

Or, it could go NC-17 and be a gigantic slutfest. Either way, it’d be female-teen centric, girls would be punished far more than boys and the end lesson would be something out of a 7th Heaven episode.

Should they? A remake based on the original script – yes. Otherwise, leave it. Why, God, why? Name. This one almost happened. Say, five years back there were ‘talks’ about sending a bunch of frat and sorority students to a manor house ‘haunted’ by a crazed killer.

What would they do to it? Because of the success of When a Stranger Calls and the forever-grim Prom Night redux (that’ll keep cropping up, soz), Hollywood execs, who I can only assume drool over Excel spreadsheets of weekend box office results, had their evil eyes on updating this genre classic into guess what? PG-13! Not that the Linda Blair orig was dripping with grue and boobs, but c’mon? Slasher films should contain at least some slash. Thankfully, it appears to have fallen off the radar, but I imagined a more-or-less straight up Xerox only with unpleasant bitchy girls and scheming frat boys everywhere you look.

Should they? No. Hell Night‘s plot is so derivative it could be woven into any new film, see the Terror Train/Train saga. It’s name really isn’t that well known outside of dorky websites such as this and, unless we get another retro-fest, I think this one might escape unscathed. Why, God, why? Yet another calendar-date psycho slasher film, ripe for the remake, a film titled Graduation Night to star Zac Efron was rumoured in the wake of his High School Musical escape plan. As yet, nothing more.

What would they do to it? *sigh* I’m as tired of dredging up fucking Prom Night as you are of reading it, but it was stupidly successful for a movie so barren of anything. Others wanted a slice of the pie. The idea of a track team done in is every high school geek’s dream, but you know the cast would be a bunch of steroid-infused 28-year-olds trying to pass for 17. Death by various athletic equipment should also return with a pole-vaulting vengeance.

Should they? Yes! I’m not precious about Graduation Day; production wise it is piss poor, and there are some cool moments that would update nicely (except that stupid sword-through-football thing), but it’d need to be harder than PG-13. After four years of high school, there are people you want to see die. Bloodily. Why, God, why? Infamous Video Nasty of shears-toting caretaker has also bee rumoured for a remake for some time. Like Graduation Day, the original film isn’t that wonderfully made: The script is all over the place like a drunk F1 racer, it had the worst excuse for a lead character in Alfred, and it was uncompromisingly violent.

What would they do to it? Hopefully, not much more than tighten a few screws and clean it up. The story has all the hallmarks of a genre classic, it was heavy on the grue and the nudity, boasted a cool score, and has stood the test of time to some degree in terms of reputation. I don’t see how it would work as anything less than an R-rated bloodfest, Cropsy doesn’t snip fingers off just to see it cut from the final print. I have the nagging feeling it’d be adorned with some class-straddling teen romance, say uptight middle class girl and wrong-side-of-the-tracks boy. Ugh.

Should they? Only if the budget was high enough to get it off the starting blocks with any hope of being good. Too many summer camp slasher films attempt to get by on $75 and a few bottles of ketchup. Why, God, why? You’re Next proved the fusion of home invasion horror and slasher conventions can be awesome; this film covered much of that ground thirty years earlier. They re-did Mother’s Day with a similar edge, so why not this too?

What would they do to it? Alone in the Dark is one of the few early 80s slasher films that injected a bit of humour into grim proceedings. You’re Next traded quite heavily on comical denouements for its characters, and with four escaped psycho patients tormenting a family, what is there to lose?

The original film is flawed with too little focus on females, be they victims or ass-handing heroines, that would need to change. If it doesn’t go lighter, take it darker – make those escapees really shady and unnerving.

Should they? Again, I have no particularly strong binds to the original and wouldn’t feel my heart break the way it did over the announcement of the Halloween remake. Yeah, why not?

tagged with remake, slasher, the 80s, who finances this crap!?, yo! Hollywood