Tie me backpacker down, sport 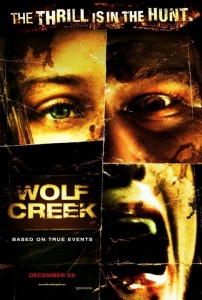 “How can you be found when nobody knows you’re missing?”

Here’s something weird; Wolf Creek is a good film which I never, ever want to see again.

Sometimes this just happens, can be that something is so effective once (Session 9; The Orphanage) that a repeat viewing will only dull its initial impact, can be that it was just a bit too heart-breaking (Brokeback Mountain) but here, despite directorial competence and the presence of actual horror, Wolf Creek is a nasty little production, quite repellent in a lot of ways and I wouldn’t want to sit through it again.

Of course there are other negative aspects to this backpackers-in-peril flick, most notably how long it takes before the travelogue beginning shifts into the horror gear (around the halfway mark). A trio of travellers, Sydney native Ben and British gal-pals Liz and Kristy, decide to drive out to Wolf Creek, a meteor crater in the middle of nowhere. Now, this film is Australian, so the middle of nowhere is quite literal. As well as Great White Sharks, Funnelweb Spiders and killer lizardy things, Australia now seems to have an abundance of psychos, for upon returning to their old car, they find it dead and, as darkness falls, macho backwoods “passer by” Mick (Jarratt) offers them a tow to his garage, where they chat affably around the campfire and then fall into a nice…deeeeeep…sleep… 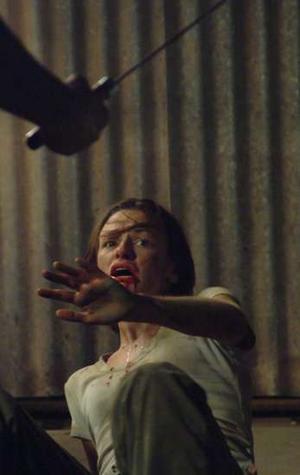 Liz later wakes to find herself bound in a shack. She escapes but stumbles upon Mick torturing Kristy and so begins the ever-cranking tension of their botched escape plans from his pit of sadism, complete with rotting corpses of previous victims.

Wolf Creek is far from your average stalker flick and while it’s not especially bloody, it’s explicitly violent and at times downright despairing as the girls suffer at the hands of the perky, wisecracking maniac – but there is little Freddy-style humour to his vicious torment.

Such is the nature of their dilemma that you do find yourself screaming at them to run faster, hurry up with the ignition keys or not do what it seems they’re about to! With just the duo the focus of the majority of the film, there are accusations a-plenty thrown at Wolf Creek for being misogynistic. It’s a difficult call to make; the film has roots in real life backpacker murderer Ivan Milat’s case, who preferred sexually assaulting girls, so there’s a real edge to it that’s uncomfortable viewing. At the same time, extended scenes of violence against the girls is grotesquely perverse and could make you feel dirty for watching it. What’s more is that Ben – out for the count for most of the film – simply wakes up and totters away to freedom at the end, oblivious to the fate of his friends and not attacked by the killer at all!

Things move from innovative to cliché once the horror is under way: The girls have ample opportunity to cut the killer’s head off at one point or shoot him, stab him, stamp on his head and instead decide to go it alone in the middle of the bush. Wolf Creek becomes the type of body count movie that thinks above its station at some points but is then unable to source a new way around a problem, the case in point being when Liz picks a random pair of car keys from a choice of a dozen or so and super magic teleporty psychic psycho Mick is already in the back seat!

This convention succeeds in some rug-yanking as things become a bit silly. Mick is able to track a single person in the huge expanse of the outback but cannot find Ben!? 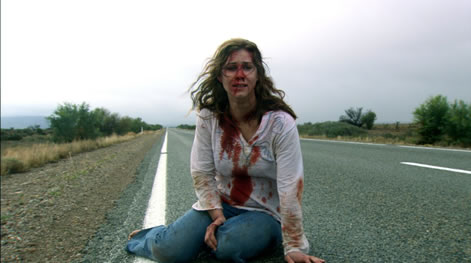 So it’s a scenically beautiful film with characters sharpened by the long, slow build; gritty and documentarian in feel but also harrowing and depressing with no comfortable resolution or confines of the standard mad slasher opus – but then that’s what horror is, right? The absence of hope – definitively, it should be horrible.

Somewhat reassuringly, McLean’s next film, Rogue, which featured a giant killer crocodile munching tourists in the outback, featured no female fatalities at all, so we can at least be sure he wasn’t going Fulci on us. I have a fair few opinions on ye olde “are slasher films hate-women flicks” debate, which I’ll find a suitable home for sometime in the future; this one cuts it fine and I wish there’d been a girl survivor to beat the shit out of Mick, but all’s (un)fair in love and homicidal rampages. Up to you.

Blurbs-of-interest: Kestie Morassi played one of the nurses in Darkness Falls. John Jarratt was in Next of Kin and played the happy coroner in Needle, as well as returning to the role of Mick in Wolf Creek 2 eight years later and a TV series two years after that.