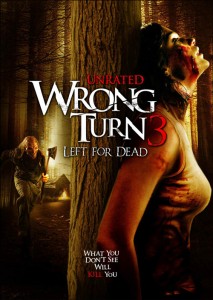 “What you don’t see will kill you.”

Dire-logue: “He’s out there… I can feel him. He’s been following us. He’s close.”

I watched half of Wrong Turn 3 yesterday and the rest today. In between, I took my dog out for a walk in a close by field. There was a creepy dense fog and, save for my dog’s flashing collar darting about in the mist, all I had to light my way was a blue-strobe LED ghost that squeaks ‘woooo’ when you press it. With mutant inbred cannibals on my mind, every blob in the dark could’ve been a psycho with an axe… Every sloppy thing I stepped in could’ve been gory entrails – but turned out to be cow shit. 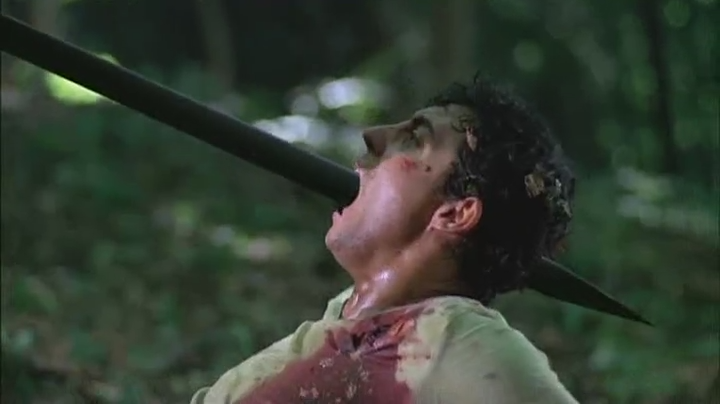 Things start okay with a quartet of “all-American teens” kayaking down a river. They stop to set up camp and one couple goes to fetch wood while the others get jiggy. Boobs appear within minutes and seconds later there’s an arrow sticking out of the boob and through boob-girl’s boyfriend’s hand. Three of the teens are offed within the first seven minutes, all quite gorily: one guy gets skewered through the gob and the other trips a trap that pays tribute to the hacked-in-half opener from Wrong Turn 2, this time splitting the guy into three pieces. It’s impressive for all of five seconds until the world’s worst CGI kicks in… 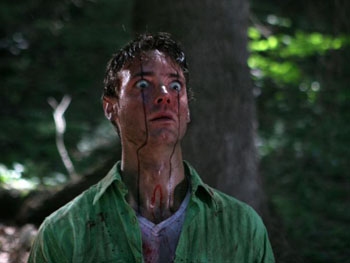 After the remaining girl, Alex, escapes, we move to a prison where officer Nate’s last day on the job (yawn…) is made worse with the news that he has to chaperone several prisoners on a transfer to another facility to thwart a rumoured escape attempt by Mexican gangster Chavez. We know he’s Mexican because he calls everyone ‘Puta,’ which, I learnt, is the equivalent of whore. The route between venues is altered to allow the solo-working inbred to run the bus off the road, let the prisoners gain control and send the group running into the woods, where Alex soon leaps out, all screams and immediate expositions…

The group discover an old armoured truck full of cash and continue yelling at one another and swearing amidst aimlessly wandering into all of the hick’s savage traps, including a sliced off face, a vertical spear impaling and a skull cracked open and its lid removed like a boiled egg… We’re only supposed to care about Alex, Nate and the one trustworthy con who swears he didn’t commit the murder he’s inside for. But I didn’t really. They were such cookie-cutter good guys that they were boring, with none of the situational flair that Eliza Dushku and Desmond Harrington had in the original film. 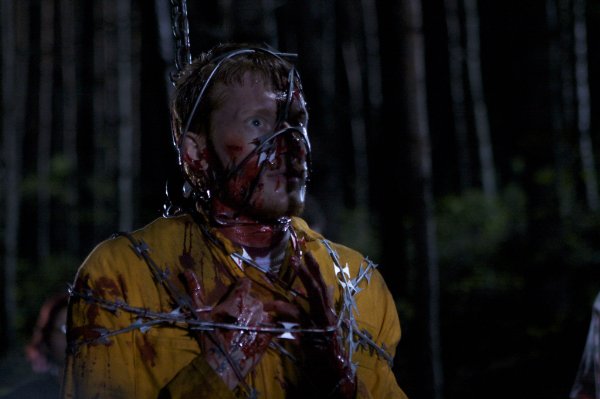 Also absent is a sense of futility: in the first film there was a real sense of doom for the teens-in-peril, that they wouldn’t get out of this. Plus they were nice kids out for a good time. The second film at least had the sense to try and make its leads affable enough to root for but all the characters in Wrong Turn 3 blur into a gross soup of I-don’t-care proportions. The only character I cared about the was the police dog and that didn’t end well.

Three-Finger, now working alone after his son (assumedly the grown up baby from the end of Dead End) is done away with by the felons, is played by a Bulgarian stuntman who looks like he’s wearing a third-rate plastic Halloween mask and also has the Hiro Nakamurian ability to teleport after he is ‘killed’ by Nate and Alex, who take his truck and drive for several minutes, finding him further down the road than they’ve managed to get! 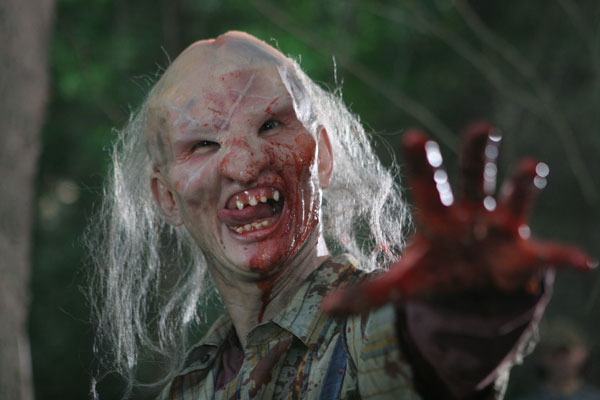 But perhaps the worst thing is like a blast from the past. But the past that came before the 80s, the 70s, before Jesus! Remember in old studio films when there was a character in a car, they drove in front of a screen and lackies rocked the vehicle from either side, that’s what they do in Wrong Turn 3 – the bus, the truck, check that fucking background! How low was the budget?

Sucky story, sucky characters, sucky prosthetics, vile CGI, crap actors, a grand total of three female characters… The sweet memory of seeing Wrong Turn back in ’03 feels like it has been raped by a backwoods inbred.

Blurbs-of-interest: Tom Frederic was the doomed boyfriend in the even worse Blood Trails. Janet Montgomery was also in The Hills Run Red – also shot in 2009, also shot in Bulgaria, also lots of trees. Declan O’Brien returned to direct Wrong Turn 4 in 2011.