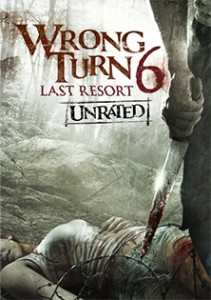 Laughter Lines: “Don’t you fret, lover, you’ll be in me one way or another.”

THREE STARS!? I know, right, but first, this:

Disclaimer: I was out sick the day I watched Wrong Turn VI, it’s plausible I was delirious.

The Wrong Turn franchise has become a de facto crown-snatcher of Friday the 13th: a sequel every one or two years, semi-naked teenagers, deformed backwoods killers stalking them… And, like Jason’s canon, the sixth movie here sees an improvement over the last few.

This could be due to long-time helmer Declan O’Brien stepping aside, but gone are the plywood sets and (most of) the juvenile humor that polluted Wrong Turn 5, replaced with richer production values and reducing the screentime allotted to the trio of cannibals. They’ve even changed to Roman numerals (on the film, if not the box), so perhaps they’re trying to claw back a little class? 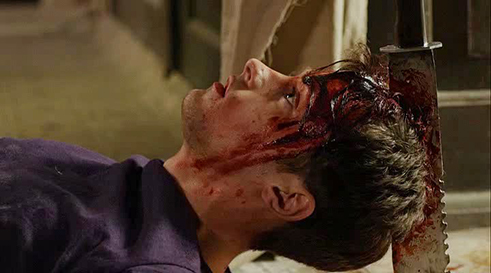 Well, no. This is still very much a Wrong Turn flick. Again, shot in Bulgaria, and still set before the events of the 2003 original. At this rate prequels will outnumber sequels. Seven New Yorkers drive out to Virginia after failed Wall Street broker Danny (Ilott) discovers he has inherited a spa hotel, Hobb Springs, presently run by tactile brother and sister Jackson and Sally.

Danny soon becomes embroiled in their chatter about ancestry, roots, family blah blah blah, while his friends grimace at the rundown surroundings and are eventually killed off by Three Finger, Saw Tooth, and One Eye, all of whom look more like trick or treaters in dollar store Halloween masks. Elsewhere, the usual excesses of female only nudity (a fat guy’s ass does NOT count), grisly demises, and a predictable finale, are present and correct. 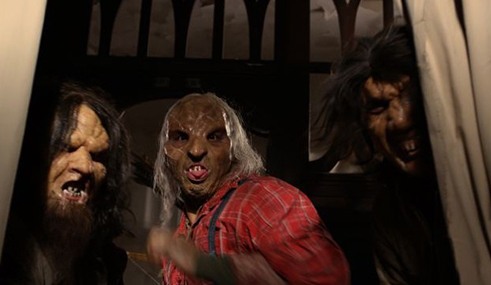 Moving with slightly less frenetic energy to get to the bloodletting and some gusto in nominal heroine Zoll, Last Resort at least appears to be trying something new, but how long can it go on?

The series might well write itself into a corner before too long, look how they had to pull the plug on Halloween as it descended down that Thorn/Druid corridor. Still, it’s better acted and more engaging than all of the installments since Dead End, which at least holds some hope out that the inevitable Wrong Turn VII might not completely suck either…

Seems since it’s release the film has gotten into a bit of bother by featuring a genuine missing persons picture of somebody who later turned up dead in Ireland!? Expect a re-cut and re-release down the line.

Blurb-of-interest: Parvanov was in Wrong Turn 4 as one of the other inbreds.