When wrong is right 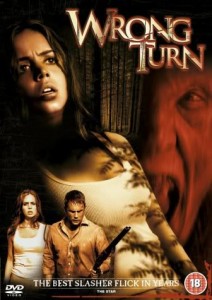 “It’s the last one you’ll ever make.”

If you venture on to the IMDb message boards on the Wrong Turn page, there’s plenty of “this is the worst film ever ra ra ra…” declarations, which plague most slasher horror films on the site. Why people can’t distinguish between fact and their opinion is a continuing mystery as far as this is concerned. There’s no way one could see every film in existence to make a sound judgement.

A sort of inbred cousin of The Texas Chain Saw Massacre‘s antics mashed up with 70’s cannibal features into one of the best back to basics horror films of its era. What Wrong Turn does and why the idiots who continually dismiss it on the IMDb are stuck in a sort of perpetual motion twat-wheel that they can’t get out of (coooool!!) is to ignore comic relief, over-intellectualisation of the product and just tell the story of what happens when city folk are thrown together with admittedly ridiculous looking backwoods freaks. 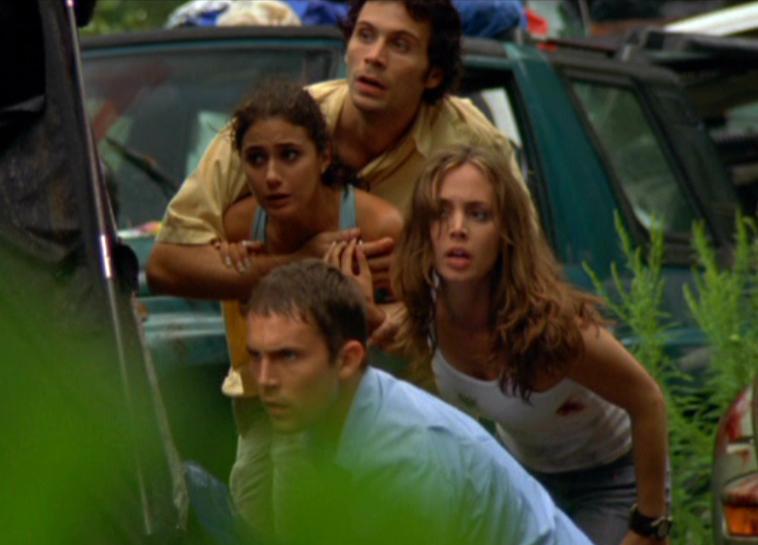 After the requisite opening slaying of a couple of luckless rock climbers, we swoop in and meet Chris Flynn (Desmond Harrington) on his way through West Virignia to an interview, persumably for some medical post from his banter, when he is caught in tailbacks that thwart his tight deadline. He doubles back and finds a turn off and a map at ye olde ramshackle gas station (complete with snaggle-toothed hick for an attendant) that shows him Bear Mountain Road will serve as a good shortcut. This, as we might’ve guessed, will be the wrong turn from hell. Or to hell if we’re going to get pedantic about it.

Some way down the road, Chris rear-ends a stranded SUV belonging to five teens on a camping trip who’ve fallen foul of some barbed wire tied across the road. With both vehicles totalled, Chris and the kids hike off to find help, leaving a couple of their friends to babysit the cars and, quite quickly, get murdered by whomever lives in them thar woods. 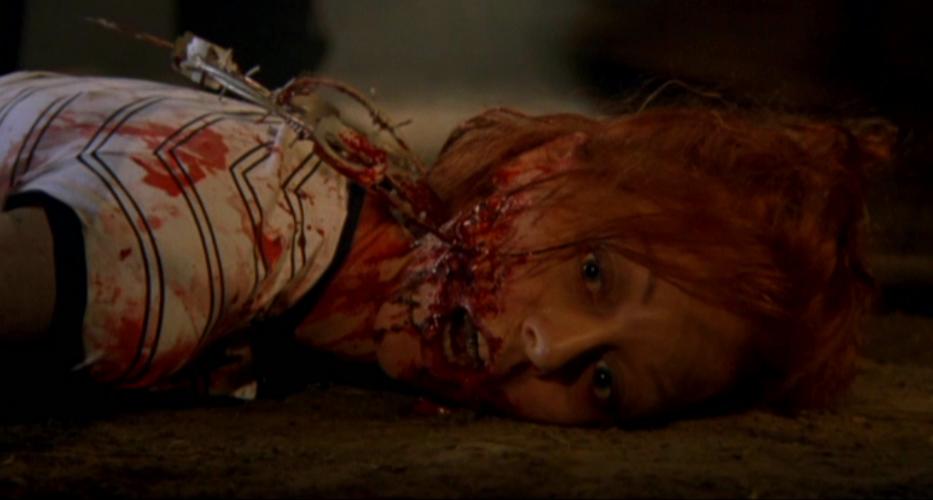 Their friends, perky to-be-weds Carly and Scott and evident final girl Jessie (the lovely Dushku) and Chris come upon a shack-of-a-house in a clearing and go inside to look for a phone but find jars of questionable meat-products, pots full of car keys and other belongings and a body in the bathtub but before they can flee, the inhabitants return with their vehicles in tow and, as the group hide, flop a dead friend on the table and saw off her leg for lunch.

Things take a turn for the (even) worse when the group are caught creeping away and madmen give chase, which is essentially what the rest of Wrong Turn is. The simplicity of the opus makes for easy viewing (unless you’re squeamish) and a bunch of sequences that aren’t altogether original play out nicely and have you rooting for the kids – surprisingly all of them – to either get the fuck outta the woods or fight back with gusto. Working from a what-would-you-do perspective, the group don’t make too many idiotic decisions that get them killed. They try to hide and create diversions that don’t go to plan but it just seems like luck ain’t on their side. 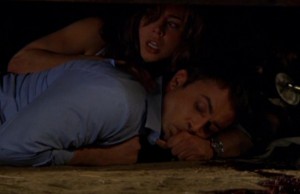 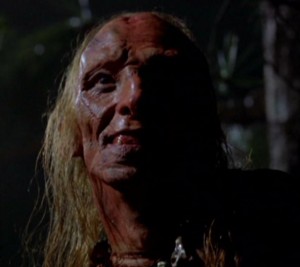 While it’s content is pretty inconceivable, there’s an awesome scene where the fleeing protagonists come upon a clearing chocka with discarded vehicles, most of which have blood splattered all over them and recognisable belongings spilling out of them; climbing ropes, picnic hampers, shoes, sunglasses, a child’s doll. It’s jarring and upsetting, far more than most slasher flicks manage to be because they trade only in offing the kind of hateful twats that say “worst movie ever” and nobody in the audience cares. But the belongings found in the Wrong Turn parking lot of death are everyday things; luggage of the missing. And it is sad.

The characters gasp and question how the psychos been getting away with it for so long? Yeah, it’s a bit dumb to think so many families could disappear in one region and nobody fly a chopper over and spot a massive clearing full of cars! Hey-ho. 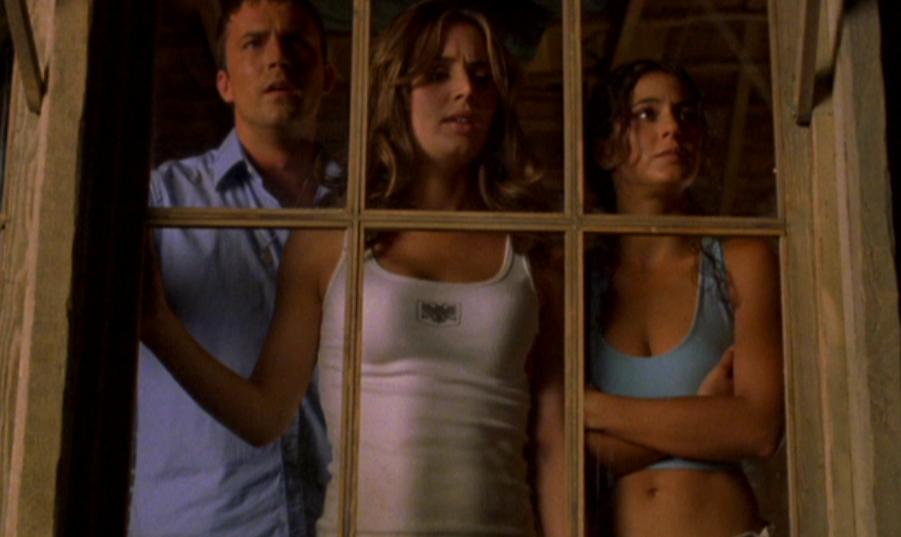 Later on there’s a great tree-top cat and mouse game and then finally the last ones standing – pretty damn obvious from the moment it begins and the DVD cover – get to dish up some sensational revenge. The scene is sadly a bit short lived as I was almost yelling for them to hit, punch, kick, poke, scratch harder first time I saw it, but the city people channel enough primal inner guts to let the cannibals have it and walk away largely intact.

Wrong Turn is short, punchy and to the point. No legacy and no pretence, it’s a rare ‘honest’ production that surfaced the same year as the suspiciously similar Texas Chainsaw remake. If I had to find fault, it’d be the excesses taken with the trio of inbreds; their malformations taken to the extreme that it becomes a bit of a joke, which was pushed to new levels of stupidity in the sequels. Nevertheless, it’s fictional – who cares? Suspend your disbelief and cynical “that would never happen” mindset and get into it. It rocks. 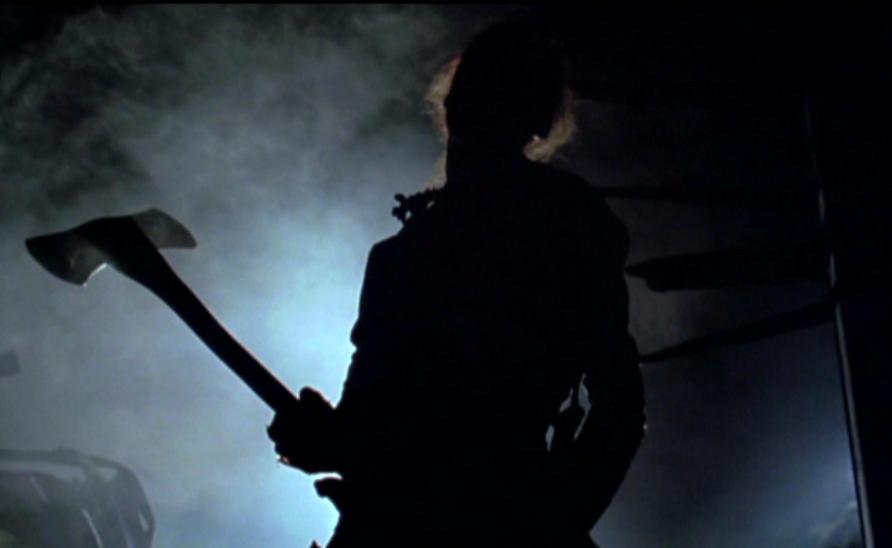 Blurbs-of-interest: All three cannibals have been in slasher movies before – Julian Richings was the creepy caretaker of Urban Legend; Ted Clark was the gorky newscaster-frat in Happy Hell Night; and Garry Robbins was the loon in Humongous. Lindy Booth was in Cry_Wolf and American Psycho II; Jeremy Sisto was in May; Kevin Zegers was in The Hollow. Writer McElroy earlier scripted Halloween 4 and the Wrong Turn reboot in 2021.