A festival of wrong 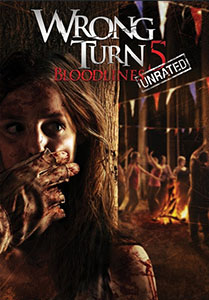 Laughter Lines: “Can you help me, officer, I think I took a wrong turn…” / “Another wrong turn?”

Almost ten years ago, I drove some distance to see Wrong Turn on the big screen. Expecting little, I was stoked to get a lot. While not a massive commercial success, amongst the horror audience, it has quite a good reputation for its balls-to-the-wall high-octane survivalist opus, which pits inner-city teens against a trio of mutant cannibal woodsmen in the middle of the West Virginia boonies.

I imagine it’s how people might’ve viewed A Nightmare on Elm Street twenty years earlier, and then mourned the dilution of the villain over the ensuing sequels. Freddy, however, at least retained a scary enough ambience in the second and third movies, before toting all the threat of a puppy thereafter. The mutants of Wrong Turn took the Chucky route to all-out parody ten minutes into the second film. A wrong turn of another kind.

While the second movie was camp and bloody enough to be entertaining, by the time the third came around, production had been outsourced to Bulgaria and all aspects of horror were lost in a sea of cheap prosthetics and low-grade CGI grue. They went to Canada for the fourth (a prequel) and it’s back to Eastern Europe for the fifth film, a sequel to the prequel. I’m dizzy now.

The sad result is that Wrong Turn 5 is even worse than the third one. A combination of misleading plot, British actors shipped to Hungary and there trying to sound American, sets that look like they’ve been made of a cheap Lego substitute, and cheapo Halloween-mask make-up effects for the villains.

Observe Three-Finger in the original and how he looks now, which is ironically supposed to be a matter of weeks or months before the 2003 film:

…or rather then-er. Further back.

Here, five teens camping out near the town of Fairlake, West Virginia, for the “Tenth Annual Mountain Man” festival, wrap their BMW round a tree and have an altercation with Doug Bradley, adopted father of sorts to the mutant loons. All are rounded up by the plucky female sheriff and thrown in jail.

Pinhead’s boys soon come to town to break him out, crossing paths with the same group of teens as they go and inflicting all sorts of pain on them: one girl’s belly is slashed open and she’s fed her own guts as she fades away, two more are run over by one of those ice-shredding trucks, and there are burnings, stabbings, and guttings galore. 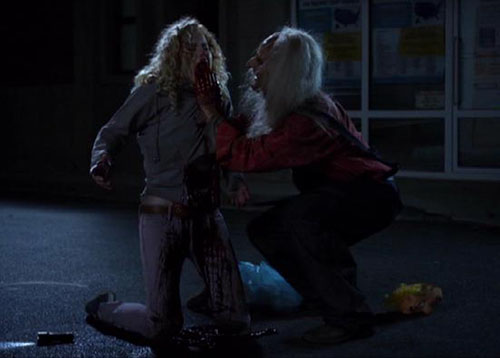 A festival setting might’ve been fun, but the budget was clearly so low they couldn’t afford one. Almost everything occurs in the cop shop, a motel room, or the Lego street sets, rendering Wrong Turn 5 more boring than any of its other sins.

Virtually every attempt to be creative fails, save for a couple of real-enough looking car crashes. Third-time-returning director O’Brien fills the time with ad-hoc nudity, people arguing the same point over and over, and sloppy demises for all. Three-Finger gets most of the screen time, giggling like the godawful Child’s Play-puppet he’s become.

We’re a long, long way from the low-concept, high-result territory of the first film. Makes me wonder what those involved with that film think when they see Wrong Turn 5 on a shelf? 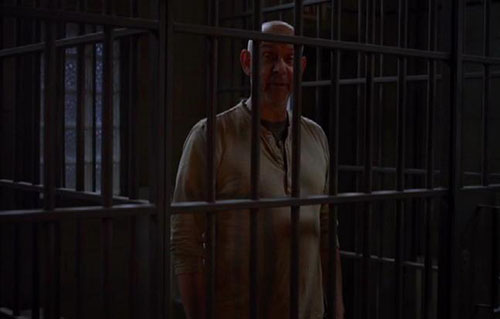 “Can you still hear the lambs, Clarice?”

Blurbs-of-shame: Peter Brooke was later in the shameful Jeepers Creepers: Reborn; Iliev played Three-Finger in Wrong Turn 3; Radoslav Parvanov was one of the loons in Bulgarian-shot WT-rip off Stag Night. Look out for pre-Game of Thrones performances from Roxanne McKee and Finn Jones.

tagged with accents from hell, after they were famous, gore o'clock, Nu-di-ty, sequel city, slasher, who finances this crap!?