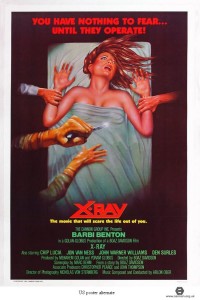 “You have nothing to fear… Until they operate!”

Like most of the slasher films from this era, X-Ray with all its aliases, the massacre to be is born out of the childhood trauma that opens the film. Gorky Harold gives his neighbour Susan a Valentine’s Card, which she laughs at and her brother David tears it up. Subsequently, Harold (having seen this through the window) sneaks in and murders David while Susan is out of the room.

Nineteen years later, Susan (now played by Playboy model Barbi Benton) stops by at the city hospital to pick up some test results, unaware that said results have been swapped for some really bad ones!!! The hospital staff, all demonstrating as much competence as a first-day McDonalds trainee, practically imprison Suze in the building, telling her she needs an operation now. Now! NOW!!!

As far as Halloween clones go, Israeli-shot X-Ray is hopelessly inept. Everything about it sucks and yet it was so much fun and never got boring, which is always a good sign for these flicks (Visiting Hours take note). That said, the version I watched may have been heavily cropped for the UK release, which was awarded an X-rating and never resubmitted.

Blurbs-of-interest: Kid actors Hoy and Jacoby were two of the homicidal sprogs from Bloody Birthday; Jon Van Ness was in Tourist Trap; director/writer Davidson primarily works as a producer for Nu Image, who make cheaper-than-chips Sci-Fi DVD films with such imaginative titles as Crocodile, Octopus and Spiders as well as crud slasher flick Skeleton Man.

tagged with before they were famous, gore o'clock, Nu-di-ty, rip-off central, slasher, slasher films that aren't supposed to be funny but are funny, spoilers, the 80s, what the hell!?