Ghost of Krampus Past 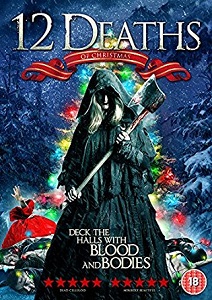 “Deck the halls with blood and bodies.”

It doesn’t bother me that some films are made with budgets so low they can only disappoint in the same way that the attractive looking gift under the tree turns out to be a hand-me-down Bible your sister used to own (this happened to me one year).

What royally pisses me off is that more effort appears to go into creating box art designed almost to dupe the casual HMV browser into picking up said film. The DVD cover for 12 Deaths of Christmas is significantly more interesting than the 91 minutes of content. And those 5-star reviews? Two of them I cannot even find anywhere and is ‘mind numbingly terrifying’ really a superlative? Not a good start.

Anyway – let’s breathe, sip some Rekoderlig, and regroup. An overlong narrator-title-card combo tells us that kids were murdered in 1921 in the English town of Belgrave. It happened again in 1992, and the locals blamed and hanged local hag Molly insert-spooky-surname-here. Twenty-five years later, all little Amy wants for Christmas is for her parents to get back together. Classmate Callum has a crush on her. Grandpa’s got a not-so-secret drinking problem.

A new rash of child disappearances has begun to plague the town (the first such scene stirs up nice echoes of IT), and a group of people who Know What They Did Last Christmas gather at the church to ponder the possibility that Molly has returned to collect on the hex she put on them before her death. Some say ‘yeah, whatevs!’, others are scared. Children continue to disappear.

There’s an amusing scene where a vile child dares her babysitter to scare her, so said teen girl tells her the legend of Frau Perchta, which is the standard Candyman say-the-name-X-times-in-front-of-mirror gag (fitfully, the girl knows of this and comments on it). But it works, and the hag manifests. Most LOL-ingly, the babysitter sends the child from their hiding place to get to the phone while she stays concealed!

The second half of the film is set pretty much entirely with Amy’s family on Christmas Day, when Dad does come over, but brings his new girlfriend with. Witch attacks. Revelations. Twist. Blah blah blah.

In spite of the title, the ’12 deaths’ are just about cobbled together from flashback scenes, missing kids who we only assume are toast as they’re never seen again, and otherwise most scenes of violence are directed at younger women, a facet of the genre that irritates me no end. The new girlfriend is clearly destined to die as soon as she walks on set, and although Dad left Mum and daughter for her, he lives on for quite a while longer, while she is stabbed, tied up, and carved to shit with an electric knife. Then there are the non-murder deaths: Accidental kills, those committed by parties other than the killer etc. Fuck, I’ve run out of cider.

While brave to cash in on the post-Krampus wave (the film is known as Mother Krampus across the pond), the £££ needed to do the tale justice sadly just isn’t there, and the film suffers because of it – although it’s sufficiently well acted (even – gasp! – the child actors do well). Brings to mind the similar-looking Silent Night, Bloody Night: The Homecoming from a few years back.

Blurb-of-interest: Michelle Archer was in the remake of Unhinged.