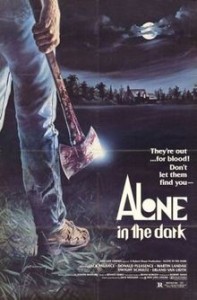 ALONE IN THE DARK

“Anything can happen when you’re alone in the dark. Anything.”

Laughter Lines: [mid-hostage situation] “We’re all worried, Lyla, sometimes you have to make the best of it.”

This early release from New Line shares several similarities with their later Nightmare On Elm Street franchise such as the presence of producer Robert Shaye, director Sholder (Elm Street 2) and setting it all in a town called Springwood!

Schultz plays the new doctor at Pleasence’s low security institution known as ‘The Haven’ which houses just four dangerous patients on the ominous third floor, which is controlled by electric doors and alarms. When a blackout occurs (during the concert of a band called The Sic Fucks who sing a song called Chop Up Your Mother!), the quartet of loonies escape to go after their new doctor’s family, believing he murdered their beloved previous doc. 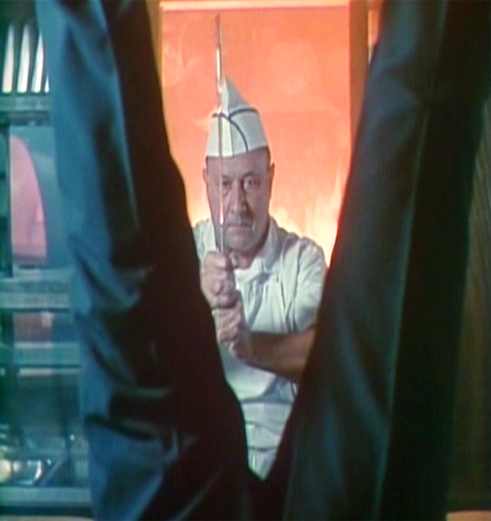 Although the set up is essentially Halloween with three extra killers, effective plot twists and some sharp shocks help it along to a satisfyingly offbeat conclusion as the killers descend on the family home. Donald Pleasence practically retreads his role, this time however instead of insisting the escapees are “pure evil” he believes by talking to them he can resolve their anger. One of the other killers is an overweight child molester and another dons a hockey mask at one point!

The murders are more outlandish than standard throat-cuttings and stabbings, with a particularly leg-crossing machete between the legs and the infamously phallic knife blade coming through the bed between the legs of a nubile babysitter.

It would seem as if Sholder was trying to avoid the standard conventions of other slasher films by concentrating more on the killers’ joint psyche while imitating moments from other movies and steering away from long, tedious stalking sequences. 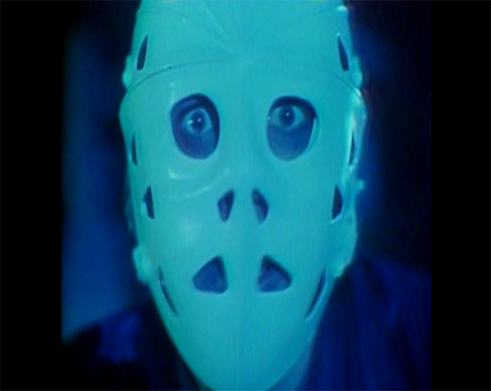 On the whole Alone In the Dark succeeds in creating a good diversion from the usual garb and Elizabeth Ward highly impresses in the usually naff threatened-child role of Lyla.

Blurbs-of-interest: The second victim killed in his car (Dr Barkin), was Steve Dash, who played Jason in most of Friday the 13th Part 2; Lin Shaye was the receptionist; Brent Jennings was in Children of the Corn IV; Pleasence’s non-Halloween credits include Dario Argento’s Phenomena; Dwight Schultz was in The Fan; Jack Sholder was the editor on The Burning.

tagged with before they were famous, get your own ideas!, Halloween, one two Freddy's coming for you..., slasher, star power, the 80s