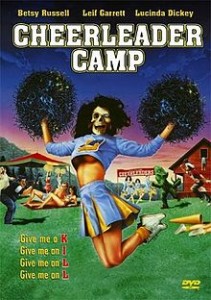 This film couldn’t be more 80s if it wore spandex and broke into a rock ballad: drug-bust magnet Leif Garrett, pre-Saw Betsy Russell, teens completely unaware what to do when being stalked by a maniac, despite this happening more regularly in American culture than almost anything else in the decade…

The Lindo Valley Cheer Squad (all matching uniforms and big hair) attend a competition at Camp Hurrah and sooner or later find out just how far somebody will go to make their mark on the cheerleader community as an off-screen presence begins to do away with them amidst the godawful music, horrific rapping, and cheerleading routines that Steps would’ve snubbed.

Is the killer per-chance whiny nightmare-plagued young Sigourney Weaver-a-like Alison Wentworth, who is concerned that she doesn’t have enough personality to keep her balding boyfriend Brent/Brett/Brad (it varies) interested in her. She’s probably right.

Produced with just about enough surface gloss to make it look like a slightly higher budget Sleepaway Camp; the acting is tolerable and the comedy stupid enough not to offend. Only the plain idiotic attempts to pull the wool over the audiences eyes with regards to the killer’s identity is truly irritating: It’s plainly obvious who it’s gonna be from the first time the character speaks.

If you don’t work it out – I stress the IF – wind back and watch said individual’s suss reaction shots, extraneous lines and lack-of-presence at each murder.

Also, there’s a great, random review on IMDb from some girl who says she “watched it at schmevan’s (!?) house” and was concerned that she would be “slashed to death with pom-poms and just DIE!” when she walked home.

Ongoing rumours about the Uma Thurman-starring sequel a few years later have never amounted to much. Cheerleader Camp 2 is reportedly Camp Fear, which stars Russell, Flower, and also Vincent Van Patten from Hell Night but has nothing to do with cheerleading. And Uma Thurman still isn’t in it.

Blurbs-of-interest: George Flower was also in Berserker and The Gas Station short from John Carpenter’s Body Bags; Teri Weigel appears as a body double in Far From Home; as well as being Jigsaw’s wife, Russell was in Chain Letter.

tagged with after they were famous, get your own ideas!, hair don'ts, obvious identity of killer, slasher, star power, summer camp, the 80s