Sex and the city. And murder. And more sex. 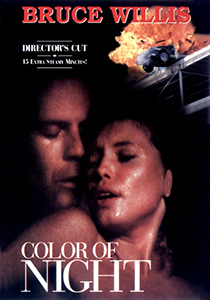 “Five suspects. Two lovers. One killer. Nothing is what it seems… except murder.”

Despite big budgets and star power not to be sniffed at, this subset was just as trashy as any low-rent slasher movie from ten years before, upping the skin and dropping the grue. Possibly top of the tree in terms of trash appeal is also the closest in relation to its slasher flick origins: Witness the utter stupidity that is Color of Night.

Bruce Willis is New York shrink Bill Capa, who witnesses angry patient Wilhoite toss herself out of his skyscraper office window. The trauma of the incident renders him unable to see any shades of red. 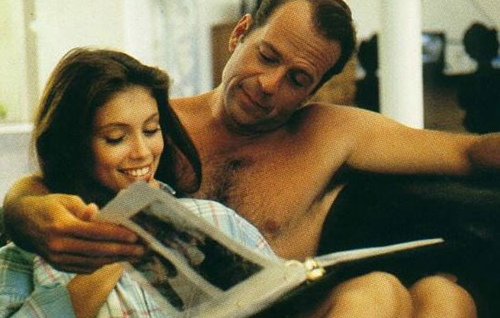 A few weeks later, he relocates to Los Angeles to catch up with an old shrink-pal (Bakula) and sits in on his Monday night therapy group, populated by a quintet of folks with an assortment of problems ranging from nymphomania to barely suppressed rage and gender identity issues. It’s plainly obvious the killer is one of the group. It’s plainly obvious which one it’ll turn out to be also.

When shrink-pal is knifed to death in his office, Brucie sticks around to pick up the pieces after being nominated by a loudmouth cop to break the news to the therapy group. This all runs parallel to his aggressively sexual relations with cutesy tease Rose (March), whose mysterious comings and goings become suspicious.

High-octane stunts weren’t popular in the slasher sub-genre, so Color of Night provides an interesting diversion from the usual who-dies-next composite, but the intermittent soft-core sexual escapades of the leads (that show Brucie naked from all angles) pad the film out past a grinding two hours, with a rushed conclusion that’d be good were the identity of the killer not so luminously flagged in front of our eyes. 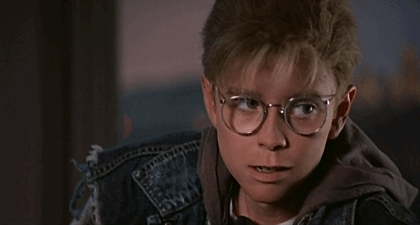 A moment which would make a great Ridiculous Scene O’ the Month features Brucie, walking along the street, is being stalked by a red car (so he can’t see it) that drives along the top of a building, where it would be 100% impossible to see somebody on the street below sans periscope, and then manages to calculate the precise moment it should shunt another car over the edge to land on him.

Crap, a box office flop ($19m against a budget of more than twice that), but look at that cast roster: Bakula, Warren, Knight, Dourif, Henriksen. The latter two are largely wasted in their red herring roles, but as a curiosity beyond the usual Jason-kills-teens template, Color of Night is a trashbag dipped in cheese affair: it’s ludicrous but kinda tasty.

Blurbs-of-interest: Dourif was the voice of Chucky throughout the Child’s Play series and was also in Chain Letter, Trauma, Urban Legend, Dead Scared, and both of Rob Zombie’s Halloween re-do’s; Henriksen was in The Horror Show, Madhouse (2003), and Scream 3; Kathleen Wilhoite played the quirky psychic in Witchboard.

tagged with get your own ideas!, Nu-di-ty, obvious identity of killer, slasher, star power, yo! Hollywood