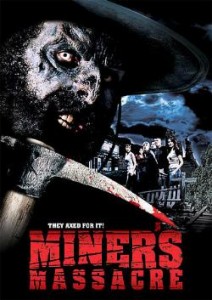 CURSE OF THE FORTY-NINER

Dire-logue: “All the gold in the world can’t help buy you a clue.”

Cheap and cheerful slasher film from the director of Friday the 13th Part VII, which begins with the inexplicable resurrection of a buried skeleton, which looks more than a little bit like Freddy’s revival in Elm Street 4. Skelly rises as a deformed miner, who dresses like The Creeper, and has a penchant for pick-axing those who come in search for for his hidden cache of gold.

Enter six young(ish) friends who have received a nugget from a relative of theirs who has since disappeared (dead, of course). There’s boring married couple Claire and Nick; greasy-haired loser Axl and his vacuous, schizoid girlfriend, Tori; and sexy Rox Ann, with her materialistic other half, Hayden. Together, they gather disjointed details of a mythical ghost who kills all who come to the area but promptly dismiss it all as redneck rantings and go camping anyway.

Soon after they discover the stash (with surprising ease) and camp out nearby to have sex and do all the things slasher film teenagers do, only to end up as barbecue meat when the fabled fiend appears toting his faithful pick-axe and an equally fatal spade.

There’s not much substance to this thrifty effort, but it bears the hallmarks of the early 80s, that earn it a little extra merit, plus some fleeting cameos from some once big names who probably owed some of the producers a favour or two. Points are deducted for flippant characterisations and poor attempts to squeeze laughs in while the story lags between slayings, so it’ll never replace My Bloody Valentine as THE miner slasher film, but the ghost town setting and some quirky kills help it hobble along nicely enough.

Blurbs-of-interest: Karen Black was also in Out of the Dark, Children of the Corn IV, Oliver Twisted and Some Guy Who Kills People; Jeff Conaway (Kenicke from Grease) was in Do You Wanna Know a Secret; Elina Madison was in Butchered; Richard Lynch was in Bad Dreams and Rob Zombie’s Halloween; Buechler had small roles in both Hatchet movies.

tagged with after they were famous, Friday the 13th, slasher