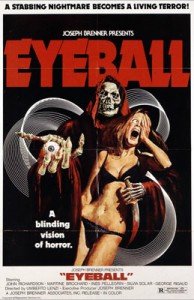 “A blinding vision of horror.”

A.k.a. The Secret Killer

Laughter Lines: “Are you saying the killer’s a sadist?” / “I wouldn’t rule it out.”

That this film begins with a tour guide saying: “Coming up on the left now is Barcelona’s bullfighting arena,” when it’s on the right sets things up awesomely.

Fun little giallo shot on location in and around Barcelona (where I’ve spent a majority of the last year) where a bus chock full of American tourists provides a victim pool for an eye-gouging killer who favours plucking peepers from various nubile young girls. Beware a few minor SPOILERS.

I’m not particularly well-versed in giallo classics, but I’ve seen enough to spot the standard hallmarks in play: Mystery glove-wearing killer, many-a fast zoom into character’s faces as something suspicious is said, “Americans” with Euro-accents, amusing translations and clunky dubbing.

Being a pre-American slasher product, Eyeball nevertheless presents itself with more than a few 80s teenie-kill aesthetics: There are POV shots as the killer floats towards his next unsuspecting victim, boobs-a-plenty, and a short but sweet final girl sequence – with, shock, a black final girl!

So, Paulette is on the tour and her boss/lover Mark, has run out on his disturbed wife to catch up and romance the hell out of Paulette. This is scuppered by the onset of the killings – first a local girl at La Ramblas, then one of the tour group is murdered on a ghost train, a waitress at a bar they all visit is dispatched while she feeds the pigs (!), and so on.

Naturally, all the men are suspects and it’s down to retirement-nearing Inspector Tudela and his young successor to solve the case before he embarks on a life of trout fishing. Fun. Aside from Mark, there’s a creepy Reverend, the boring husband of a restless wife, a cigar-chomping Texan, and the pervy tour guide, who likes to prank the young girls with his array of crappy fake spiders and rodents. Each of them is afforded more than a handful of the zooms-of-suspicion at one point. Even Jessica Fletcher would be dumbfounded by the sheer number of potential loons on this vacation.

Spain is presented in lush colours and inimitable 70s fashion choices, which lends the film a pleasantly diverting quality, as if you’re taking a holiday from the same-old American slasher film conventions.

Nothing really lets Eyeball down, it just suffers from the ridiculousness that haunts the whole sub-genre, with a motive so whacky I had to re-watch to ensure I’d actually not misunderstood it.

Otherwise, it’s business as usual: The females are all super hot and super killed, while the only male victim is old and creasy-faced, and killed off-camera. The men can be slimy, sleazy, and annoying but still survive intact, which is a general motif in most Italian body-count horror.

There’s a curiously long exchange about mud on footwear: “It’s elementary, as I’m sure you’re aware that simple walking can get a pair of shoes quite dirty.” There are eyes in a box, daggers conveniently monogrammed with the initials of a suspect, secret photographers and rolls of film with aaaaall the answers. Eyeball has it all. You won’t be bored. 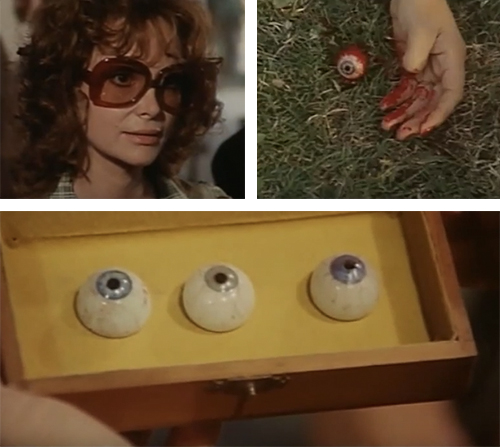 Blurbs-of-interest: Brochard and Richardson were reunited in 1981’s Fear; Richardson was also in Torso; Umberto Lenzi was later fired as director of Welcome to Spring Break but stuck around to assist his replacement, and also the unsettlingly creepy Ghosthouse.