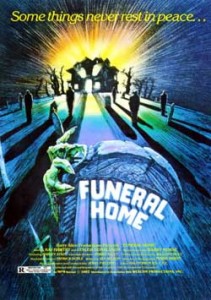 A.k.a. Cries in the Night

“Some things never rest in peace.”

Excuse me if I confuse this with Mortuary…

Goodie-goodie teen Heather (Donaldson) goes to visit Grandma for the summer and help her out at her guesthouse, previously a funeral parlour occupied by the grandmother and her late husband. Heather thinks she can hear voices coming from the cellar, where she has been forbidden to ever go.

When a businessman and his mistress check in but refuse to leave when asked, their car (with them inside) is shunted into a local quarry by a mystery truck. Then Mr Davis is murdered after confessing he’s in the area looking for his missing wife, who was reportedly having an affair with the late undertaker, who also disappeared some time earlier. Heather becomes more and more paranoid that there is somebody living under the house and eventually, spurned on by her love interest, snoops where she shouldn’t…

Material lifted from Hitchcock’s masterpiece is prevalent: the location, the cellar, even the killer’s twisted logic when eventually revealed and it’s clear that it was made primarily in response to Halloween rather than Friday the 13th. Unfortunately, slack pacing for the first two thirds makes it a bit of a chore to sit through, although it’s nice to see a few faces from other genre films dotted amongst the minimal cast.

Blurbs-of-interest: Lesleh Donaldson was also in Curtains and Happy Birthday to Me; Jack van Evera and Alf Humphries were both in My Bloody Valentine; Harvey Atkin was in Visiting Hours; Stephen Miller was in Matinee and The Stepfather.

tagged with Canuck, get your own ideas!, slasher, the 80s