Feels recently that we’ve really entered a phase of Final Girl appreciation. On screen we’ve seen Final Girl, The Final Girls, and Last Girl Standing, and in print The Last Final Girl and now Final Girls. A lot of finality in all those.

Riley Sager was reportedly renamed more gender neutrally in order to ship more copies of Final Girls. Weirdly, despite the first person narrator being female, I assumed the writer was male from the get-go.

The story concerns Quincy, the sole survivor of a cabin-in-the-woods massacre, ten years after the event, one of two other infamous ‘final girls’ takes her own life, leading the third survivor into Quincy’s life – and subsequently upending it and shaking it until everything tumbles out.

In spite of the slasher backstory requisite, Final Girls has more in common – as Stephen King’s recommendation states – with Gone Girl and The Girl on the Train. Paranoid mysteries with recurrent themes of the ‘unreliable narrator’ – the book merrily makes suggestions that almost any of the characters could know more about “what really happened that night” than they’re letting on.

Ultimately, it’s a book about the aftermath of a slasher event, rather than a recreation of. Intermittent flashback chapters back-fill the events of ten years earlier, but the formula is not dwelt upon, it only serves as a plot device. I didn’t guess the outcome, which is always a plus, and it should make a good film when it’s inevitably made into one.

Sager’s writing is dripping in rich wordplay, occasionally over-extending the scenes about baking and Quincy’s Xanax dependency and not exactly making her quite likeable enough to root for, but the locomotive need to put the pieces together results in the kind of jigsaw you hurry to complete. 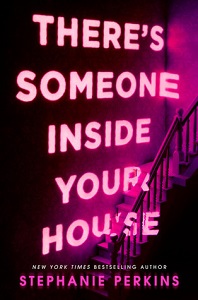 On to There’s Someone Inside Your House, which I actually read first and at the same can’t-put-it-down speed.

This is far more of a teen-slasher affair, a kind of post-Scream millennial dead-teenager story. In a small Nebraskan town surrounded by cornfields, the high school drama queen is murdered in her home.

Exiled teen Makani, completing her senior year here after her involvement in ‘something terrible’ in Hawaii, is primarily more concerned with her budding romance with pink-haired misfit Ollie, but as the murders continue and she finds herself on the killer’s list, Makani and her friends decide to play detective.

Interestingly, the identity of the killer in TSIYH is revealed fairly early on, but that doesn’t deflate the tension from the situation. In fact, Stephanie Perkins wisely uses it as a tool of fear – the town knows who is doing it, but they don’t know where the assailant is or when they will return.

The best facet in the book is the killer’s penchant for toying with victims before attacking: Moving items around, leaving drawers open that were closed before, unsettling the mouse before the cat strikes. While the writing is in a different league to Riley Sager’s, for the intended demographic this addresses some social issues regarding the role technology plays in the lives of high schoolers, the interconnectivity of people who have never spoken a word to one another drawing them together. Some of the murders are pretty gruesome too!