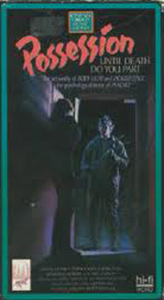 POSSESSION: UNTIL DEATH DO YOU PART

Laughter Lines: “There won’t be anybody up there – we’ll be ALL. BY. OURSELVES.”

Irredeemably boring T&A fare, notable only for starring the bitchy girl, Tamara, from Jason Takes Manhattan as the final girl.

She, Madeline (Sharlene Martin, credited here as Melissa), is abducted one night by a whiny-voiced, mother-fixated loon, Frankie, who takes girls home, forces them to dress in Mom’s clothes, and, if they’re not ‘nice’ enough, are murdered.

Madeline succeeds in escaping, but the police are almost completely apathetic, and it’s her gang of indistinguishably cloney gal-pals who suggest driving around to look for the guy, whom they run into almost straight away. Ill-prepared for this venture, they flee, cops intervene, Frankie escapes in a rowing boat WHICH EXPLODES WHEN SHOT AT.

Shortly thereafter, the girls – who might be escorts, it was unclear – go to a strip club and arrange for a couple of the suspiciously camp dancers to join them up at so-and-so’s uncle’s cabin in the woods for a bachelorette party.

Bad acting, hair, and fashion choices – about the only things you’ll remember from Possession

Predictably, Frankie ain’t dead and soon comes looking for Madeline once again, offing a couple of her friends who didn’t go on the trip, but hangs around long enough to hear an answerphone message that conveniently gives the full address of the cabin. Lord.

The girls party, make out with the gay strippers, Frankie comes along. That’s about all you need to know. It’s bodaciously unexciting, replete with clichés so dense you’d need a Humvee to plough through them: One girl goes off on her own to photograph trees! The car won’t start. The girl who had a bath conveniently never pulled the plug so the killer can drown her in it. It doesn’t stop.

Even when the killer’s presence is discovered, the last girls standing abandon the comparable fortitude of the cabin (which has a push-bar door!?) to run into the woods, where the killer, disabled by a speargun arrow while they flee, somehow teleports in front of them to jump out from behind a tree, and so they run BACK to the fucking cabin where there’s a gun!

Said woods are mysterious and wild, we know this because every time a character walks through them pan pipe music plays. This might mean something if the killer were a Native American rather than a camp-voiced suburban mama’s boy.

Brimming over with protracted T&A scenes that go thusly: Girl has shower, girl lathers up own boobs for ages, girl dresses up in kinky clothes, girl is stabbed >>> Girl has bath, girl washes self, girl dresses and paints own nails, girl is drowned in bath she never bothered emptying >>> Girl has shower, girl soaps up boobs, girl’s throat is cut in shower. Somebody somewhere does not want women to exercise good hygiene, or worse, has some real issues with their gender, note when one young woman talks about a guy she met and her friend replies: “You were in a BAR?” Why the hell not? She’s young and vivacious, should she only be allowed in the kitchen or the convent?

A plodding, dullard of a feature with absolutely nothing to recommend it unless pastel fashions, awful hair, and naked chicks in the shower is enough. With fourteen bodies dropped, there’s hardly even any grue to speak of.

This is a film nobody need possess.

tagged with Canuck, get your own ideas!, hair don'ts, Nu-di-ty, slasher, slasher films that aren't supposed to be funny but are funny, the 80s, who finances this crap!?