Yeeeee in a time when trust in the cops not to shoot you is lower than a Madonna chart debut, it’s surprising that they’re remaking it. But until that happens – and also, if ever – let’s revisit the trilogy of original 80s-into-90s thriller-cum-slasher-zombie flicks. Some spoilers follow. 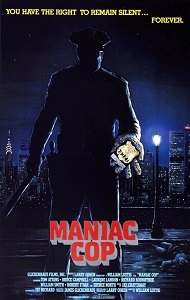 “You have the right to remain silent… forever.”

Laughter Lines: “You always take a leak with a gun in your hand? That’s a good way to blow your balls off!”

RoboCop, Sumurai Cop, Beverly Hills Cop, Kindergarten Cop, Psycho Cop and Maniac Cop – sure were a lot of ‘Something Cop’ movies around in the mid-80s-to-early-90s. While most of these garnered a following – maybe not Psycho Cop - and several generated sequels of their own, Maniac Cop is a strange venture, a weird fusion of ideas from action thrillers with some voodoo-slasher shit mixed in too.

Starting as so many serial killer films have, a young woman is walking home alone in New York City, tormented by some thugs, she runs into a uniformed cop – BUT THEN HE KILLS HER! The thugs are the only witnesses but nobody believes them. Soon after, a guy is pushed face down into drying cement and a driver slashed to death over a traffic violation – all in the first twelve minutes.

New York is in the throes of terror – which of the boys in blue has turned to slaying the residents? Grizzled detective Tom Atkins is on the case and in shepherded into suspecting Bruce Campbell’s beat cop, Jack Forrest, after his wife turns up dead she follows him, having received a series of calls from a mystery voice who keeps telling her that Jack is the killer. Turns out Forrest was just having it away with vice cop Theresa Mallory (Landon). Concerned to clear his name, the two of them investigate the suspicious death of a cop sent to Sing Sing some years earlier and was beaten to death by inmates – or was he? 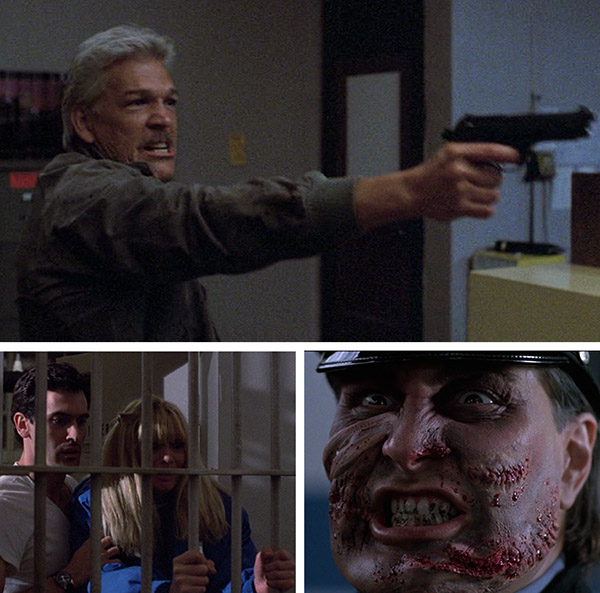 Before Forrest and Mallory can alert the important people to the truth, the undead cop – old-style super-cop Matt ‘shoot first, ask questions later’ Cordell – goes on a rampage around their precinct, even turning on his old flame after she tries to tell him he’s losing control.

Maniac Cop crams a lot into 82 minutes (look for Sam Raimi’s cameo) and is thus never boring. Cordell’s carnage-creating romp around HQ is expertly done; A scene where Malloy is handcuffed to a body; Car chases with slo-mo crashes, and all manner of creative shots and visual cues that serve to keep the horrors of the killer’s face out of shot. A longer cut with more to say on the city-in-fear perspective would be interesting, as that kinda gets left behind once our leading lovers suss out what’s really going on and who has covered up what.

Lustig and Cohen worked together on all three movies and separately have a few slasher credits between them (notably, Lustig directed the nasty Maniac, which also makes the most of NYC as a player), but this is arguably a stand-out. Although rarely bandied in with slasher movies, it has enough elements to include it, even if some of those were traded in for more mainstream concerns in the follow-ups. 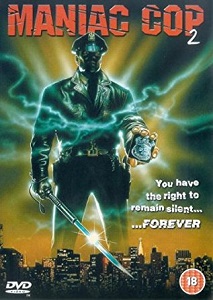 “You have the right to remain silent… forever.” – again??

Laughter Lines: “Shooting Cordell is only good for getting his attention.”

At the end of the first one, it was plainly obvious Matt Cordell wasn’t done with his Make New York Obedient Again missive, and so he returns shortly after his ‘death’ to take revenge, quickly doing away with Forrest and Mallory, who transfer the reigns of hero over to Robert Davi’s Detective McKinney and a department shrink (Christian), who has had a hard time believing Mallory, until she comes face to face with Cordell for herself.

After this solid first act, things begin to wobble as Cordell inexplicably teams up with serial killer-of-strippers Leo Rossi, breaks into Sing Sing to finish off the inmates who ‘murdered’ him, and go on a machine gun spree at police HQ, which explains that sky-high body count.

There are still some great scenes, peaking with Landon and Christian in a cab, attacked by Cordell, who handcuffs the latter to the steering wheels and sends her off down the city streets while he takes care of Mallory for good.

Some fun parts, but it lacks the charm of the first one. Joe Spinnell was originally to play the role taken by Leo Rossi, but died before production began and so the film carries a dedication to him. 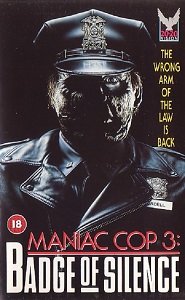 “The wrong arm of the law is back.”

A religious oddball resurrects Matt Cordell for no reason, just as a decorated female cop (Becker) is shot during an armed robbery and set up by the media to be a Cordell-like villain. Our maniac cop develops a bit of a crush on her and sets about clearing her name in the only way he knows how – by killing all of those responsible, as well as anyone else who crosses his path.

Davi returns as McKinney, this time joined by Caitlin Dulany as a doctor who just stands around in designer workwear looking pretty and screaming on cue.

More in the mould of a slasher film than the previous entry, but loses itself in a series of plot holes you could navigate the Titanic through. Still, as before, it’s a fun ride with lush production values and doesn’t outstay its welcome. Had so much time not passed, and Lustig not quit the project (his original cut was shorter than an hour!), from that ending we could’ve expected Bride of Maniac Cop to follow in 1994.

Overall blurbs-of-interest: Tom Atkins was in My Bloody Valentine 3D and Trick; Bruce Campbell appears briefly in Intruder; Robert Z’Dar was also in Grotesque; Michael Learner was in National Lampoon’s Class Reunion; Leo Rossi was Bud in Halloween II; Robert Forster was in Lustig’s Uncle Sam and also the 1998 Psycho remake; Charles Napier was in Camping Del Terrore and Wacko; Jackie Earle Haley was the new Freddy Krueger; Bobby Di Cicco was in The Baby Doll Murders; William Smith was in Valley of Death.

tagged with before they were famous, sequel city, slasher, star power, the 80s, yo! Hollywood