Into the dark / Out of the closet 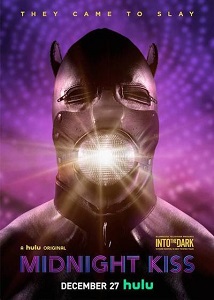 INTO THE DARK: MIDNIGHT KISS

“They came to slay.”

Into the Dark is a Hulu-produced horror anthology show with different feature-length scary tales each episode. This second stab at a slasher yarn (the first being School Spirit) opted to side-step from the usual bouncy teens set into the lives of a group of gay friends who take the chance to stay in their rich friend’s pad in Palm Springs for New Year’s Eve 2019-2020.

Unfortunately for them, a fetish-masked mystery loon has decided to send them each cryptic notes before slashing and choking them to death, starting with the obligatory shower kill. But wait, the character conventions have been flipped, so we’re in for some equal opportunity objectification and are provided with a hot muscular guy for a change.

Doubtlessly, narrow-minded types threw their remotes in disgust at the ensuing scenes of men kissing other men (though betcha bottom dollar they wouldn’t have objected to excess girl-on-girl) as the guys and their token straight female friend resurrect a NYE game known as Midnight Kiss, where they each must find a stranger to share a consensual tongue-war with, and then all other relationship restrictions are binned for the night.

Struggling artist Cameron is slightly out of sorts due to his controlling ex Joel’s over-celebration of his engagement to twinky Logan, who is largely inexperienced. Flamboyant Insta-gay Zachary wants to check out what he thinks will be a better party elsewhere, and Hannah is slowly getting peeved that she is the perpetual hanger-on with few options to pick up guys if they only ever go to gay venues.

Midnight comes and goes and the group go back to the fancy house to wind down, where the killer reappears and chases Cameron around for a while, until the inevitable unmasking, which marks the tripping point for Midnight Kiss, as the motive comes down to little more than the killer’s ego being bruised because one of the group kissed him seven years earlier and, well, that was it.

While production assets are fine, the episode just suffers from being flaccid, thrill-wise: Hot nude guys can only entertain for so long, and with few murders occurring (though the Sorority Row revisited one is neat), we’re left with a bit too much dialogue and too little action, plus a revelation that ultimately leads nowhere and is unresolved by the time the credits roll. Hellbent did it better.