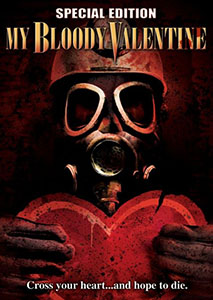 “There’s more than one way to lose your heart.”

Dire-logue: “You gotta come just to see the dress I’m wearing! Cut down to there, slit up to here! I may not get out alive!”

First-rate Fatality: Oh so many in this version, but death-by-showerhead has it.

Part Deux for Final Girl’s Film Club. Cut or uncut, My Bloody Valentine rocks. However, it rocks more now that those infamous thought-they’d-never-see-the-light-of-day scissored gambits of gore can not only be seen but inserted back into the film! 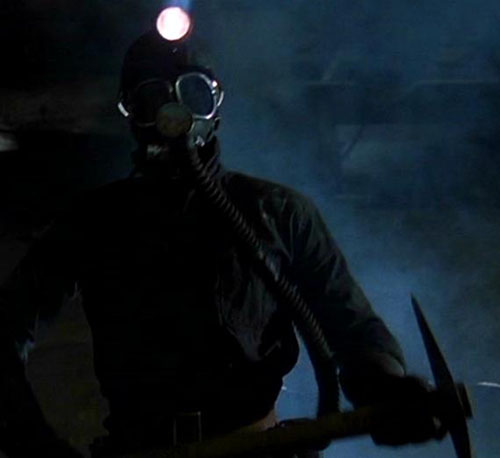 Canada had already produced uber-slasher Black Christmas and also the disco-fabness of Prom Night, but with MBV came a slight variation on the form. This time there were no middle class teenagers biting the blade in the ‘burbs, at camp or school. Here, we have blue collar workers in their mine-dependent town (aptly named Valentine Bluffs) being stalked by a goggle-masked, heavy breathing killer whom everyone assumes to be Harry Warden, sole survivor of a Valentine’s Day mine cave-in two decades earlier. Warden went mad, killed the mine supervisors and disappeared, leaving a message to the locals that they should never host a Valentine’s Dance again at the risk of his pick-axe swinging return… 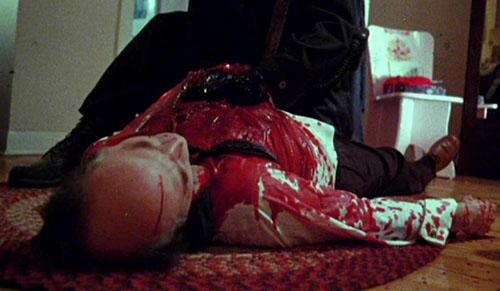 The local Sheriff and the Mayor cover up a couple of murders and cancel the “first dance in 20 years” after human hearts are sent their way in candy boxes. The younger folks – gruff miners and their girlfriends – opt to secretly party on down at the mine instead and celebrate love n’ stuff. Amidst the madness, there’s a love triangle developing between miners TJ, Axel and weepy blonde Sarah. For reasons unclear, TJ had left town suddenly, which put pay to his relationship with Sarah and allowed Axel to move in on her. Now he’s back (“and working in the mine”), things are a little tense between the trio. 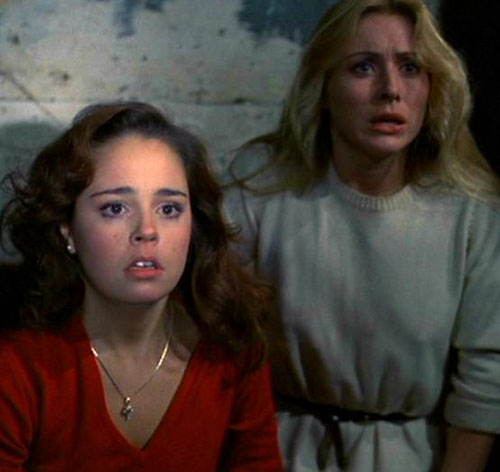 Patty and Sarah rethink their choice in boyfriends

Maniac-miner predictably crashes the Valentine’s party and begins offing anybody who senselessly wanders off on their tod; forcing their faces into boiling pots or skewering them head-first on to shower heads. Before these victims are discovered, three couples head off for a midnight tour of the mine, thus trapping themselves below the surface with the town psycho. More killings ensue until only those involved in the love triangle remain. Is one of them the killer? Or did Harry Warden return? Only a battle of the pick-axes will reveal the dreadful truth. 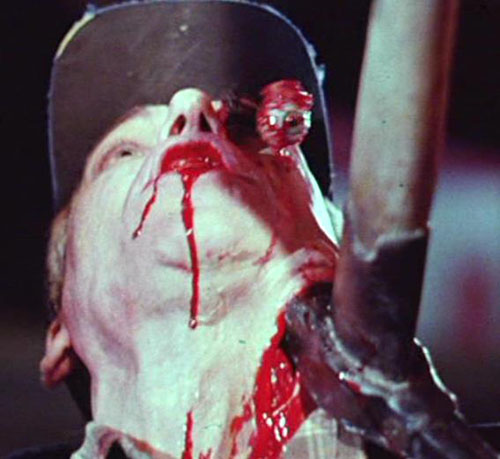 When I first saw this back in the mid-90s, I was genuinely surprised by the revelation that occurs at the end, meaning among other things that sometimes I can be a bit thick and also that the creators of My Bloody Valentine had realised a script that houses surprises that have been thought through more than, say, the other half of this daily-double, Friday the 13th. 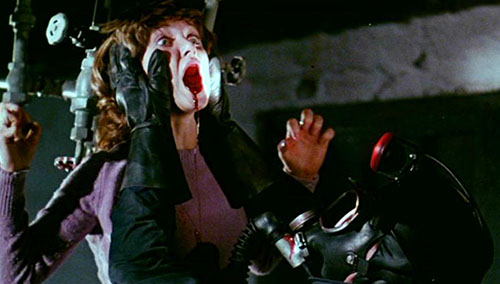 Speaking of Friday, here’s a film which also contains quite a mean streak, emphasised by the presence of the cut footage. Many films were forced to pull their gory punches in the wake of the MPAA clampdown in 1980 and, subsequently, some suffered greatly for it, cut or not. Now, at last, thanks in large part to the 2009 3D remake, Lionsgate pressed the right buttons at Paramount to polish the excised footage and reinsert it. Visually it’s obvious the celluloid hasn’t maintained its original quality but who the hell cares!? Given the choice I’d accept a few smudges and grains anyday over risking never seeing some of this stuff. It’s frakkin’ gold! Elevates the film to the point I added an extra half-star to my rating.

Unquestionably better than its cynical and nonsensical remake, My Bloody Valentine is one of the top slasher films of its day (and, indeed, ever) and anybody intending to gather a decent cross-section of titles that illustrate how much fun the slasher flick is, should not discount it. 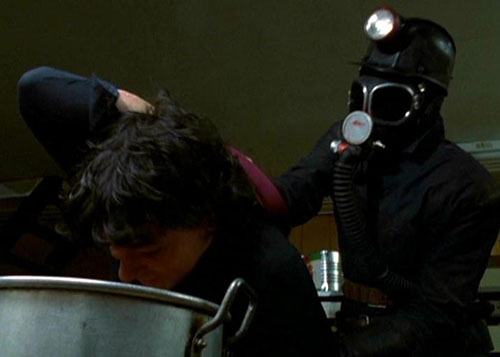 Blurbs-of-interest: Lori Hallier turned up many moons later in Heartstopper; Gina Dick has a small part in fellow-Canadian slasher from ’81, Happy Birthday to Me. Alf Humphreys and Jack Van Evera had already been in minimalist sorta-slasher Funeral Home.