And then there were nun 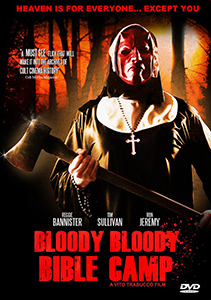 “Heaven is for everyone… Except YOU!”

Dire-logue: “I plan on being balls-deep in Betty by ten o’clock.”

I grew up in a religious household, not a strict Catholic “thou shalt not…!!”-type deranged one, more or a tambourines, sandals, and Toronto blessings-type deranged one. Marry a mockery of this lifestyle to a summer camp slasher film and I’ve found MY heaven. 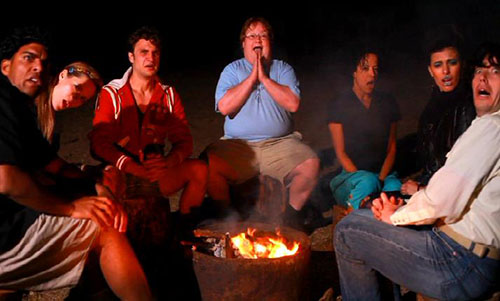 Seven years later in that slightly embarrassing year of ’84, a new busload of happy Bible-loving youths come into town with the intent of scoping out the camp to see if its worth their church purchasing it. The requisite all-knowing locals at the general store try to warn them off, but Father Cummings is intent on getting to camp and starting the Biblical fun (is that an oxymoron?).

The psycho nun, Sister Mary Chopper, soon returns to cut her way through the fresh crop of young folk who, like their predecessors, are more interested in each other than learning God’s ways, save maybe for rotund goody-goody Timmy (“I’m sorry Jesus! Please take this sinful boner away!”). Douchey Tad wants in dim-bulbed Jessica’s pants; Vance is looking for loopholes in the Commandments that allows for sodomy; Millie can’t stop touching up bad-girl Jennifer; and even Father Cummings is browsing a sticky-paged mag called CUMunion in his private time – “There’s only one type of wiener you wanna wrap your lips around!” 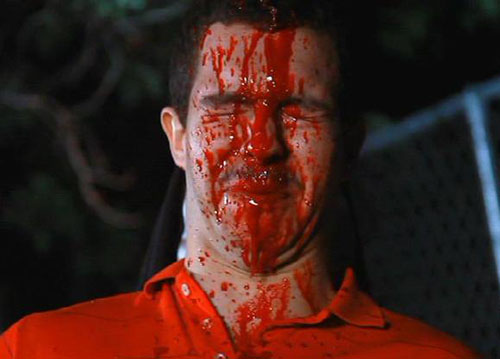 Christianity and the various contradictions of the Bible are derided at every available opportunity and the cast chew up the hammy lines with gusto, topped off perfectly with Jesus himself appearing – played by Ron Jeremy. The Bible-quiz scene throws up some great moments:

In slasher film terms, Bloody Bloody Bible Camp is Friday the 13th by way of the Sleepaway Camp sequels (the Pam Springsteen ones, that is); a high body count comprised of amusing and grisly deaths, all bathed in the sloppy gore effects (intentional): decapitation, squashed heads, crucifix up the ass, and a new meaning to the vulgar slang ‘axe wound’ as a girl cops a blade right in the… well, you know where.

Just look how Camp Crystal Lakey it is: 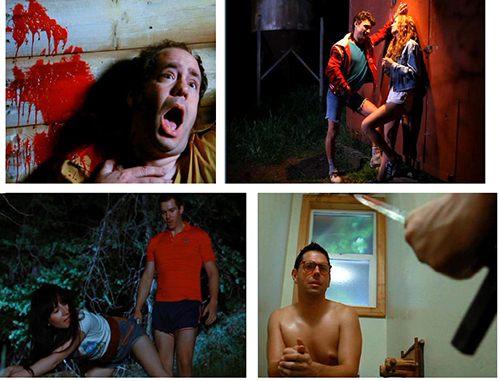 An initially unlikely final girl emerges from the pack and there’s a good, if short, chase scene with some amusing accoutrements tossed into the salad. She packs a good scream where it counts and was my favoured choice of survivor so I’m a happy camper on that front.

Blurbs-of-interest: Ron Jeremy had the title role in Andre the Butcher; Jessica Sonneborn was in Camp Daze; Jeff Dylan Graham was in Home Sick; Christopher Raff was in Jack the Reaper; Reggie Bannister was in Sigma Die! and Spring Break Massacre, which are essentially the same film.