Out with the old 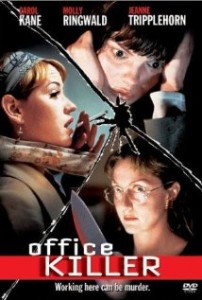 “Working here can be murder.”

1996 was the year Scream came out, the film that redefined, like, everything. Peering over the fence at that party like a sad, uninvited, neighbour kid, was Office Killer, an obscure little flick still sporting last season’s fashions and casting last decade’s names. Spoilers ensue!

Carol Kane is perfect as meek, measly copy editor (my job!!) Dorine who, when learning that the staff in her office will be downsized, decides to do some downsizing of her own, bumping off colleagues and storing them in her basement, where she plays ‘happy office’. Life’s frustrations are punctuated by her Mrs Bates-esque mother (Drummond).

Slickly made, but too slow-moving for such a short film: Dorine is interesting enough as the repressed psycho, and who doesn’t just LOVE the idea of Molly Ringwald as the bitchy, foul-mouthed co-worker who ends up being the only survivor? Jeanne Tripplehorn (game subject of a Whatever Happened To…?) is the ‘nice’ one who learns too much about her object of sympathy…

Blurbs-of-interest: Kane was the final girl in Pandemonium; Molly Ringwald appeared in Cut.

tagged with 90s horror month, after they were famous, Scream, slasher, spoilers, star power, what the hell!?